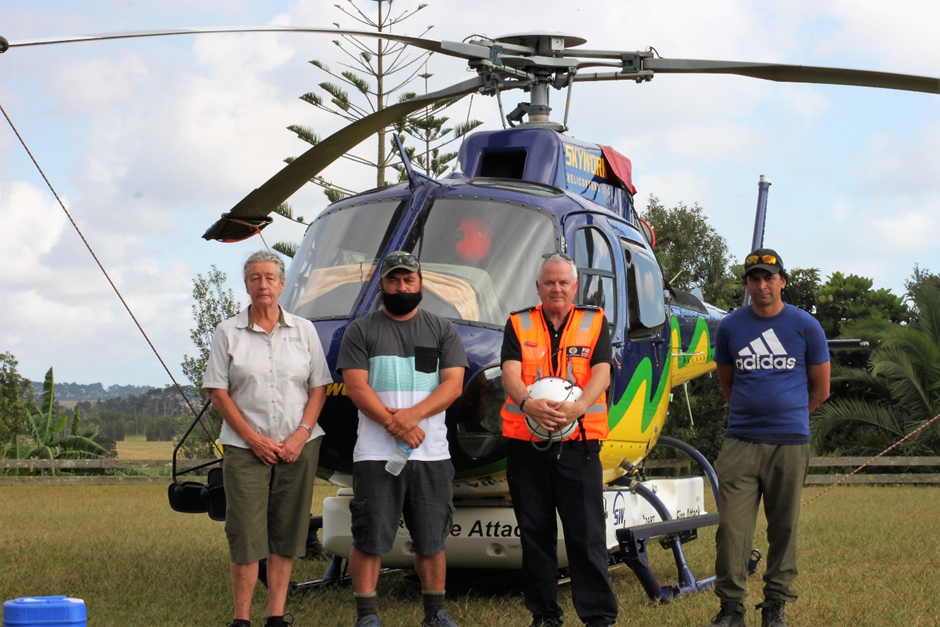 A recent collaboration between iwi Ngai Takoto, the Department of Conservation and Fire and Emergency New Zealand was a key contributing component in the successful containment of a raging bush fire that began on December 18th 2021 and is expected to burn within the peat for approximately another six months. The fire spread across whenua owned by local residents, businesses and whenua jointly managed by Ngai Takoto and DOC. Te Rūnanga o Ngai Takoto Chairman, Wallace Rivers, told Te Hiku Media that the iwi were able to share resources, skills and knowledge to exercise ‘kaitiakitanga-ship’ collectively over the whenua in a way that brought out the best possible result.

Fire and Emergency New Zealand crews worked across eight days and twelve hour shifts to combat the fire, at the peak of this time there were 80 fire fighters and eight helicopters. They traveled from all over Aotearoa and stayed at Paparore Primary School and Ngapae Holiday Park in a combination of tents and campervans, while others stayed with family. The collaborative effort also saw business such as earthworks and catering given to local businesses to support the fire fighters during this time.

Nigel Dravitzki of Fire and Emergency New Zealand told Te Hiku Media that winds were expected to reach up to 90kph at one point during Cyclone Cody who paid a brief visit, so they needed to put a preventative strategy in place, working alongside the iwi and Wharemaru Marae to do so. Part of the plan included fire breaks and applying a retardant via helicopter over the whenua. A fire break is a gap created between vegetation to prevent the spread of a wild fire. Ngai Takoto Environmental Manager, Kaio Hooper and Wharemaru Marae Chairman, Lennon Rippingale, agreed on extra fire breaks at the northern area of the fire and have both been helping on the ground since the fire began. 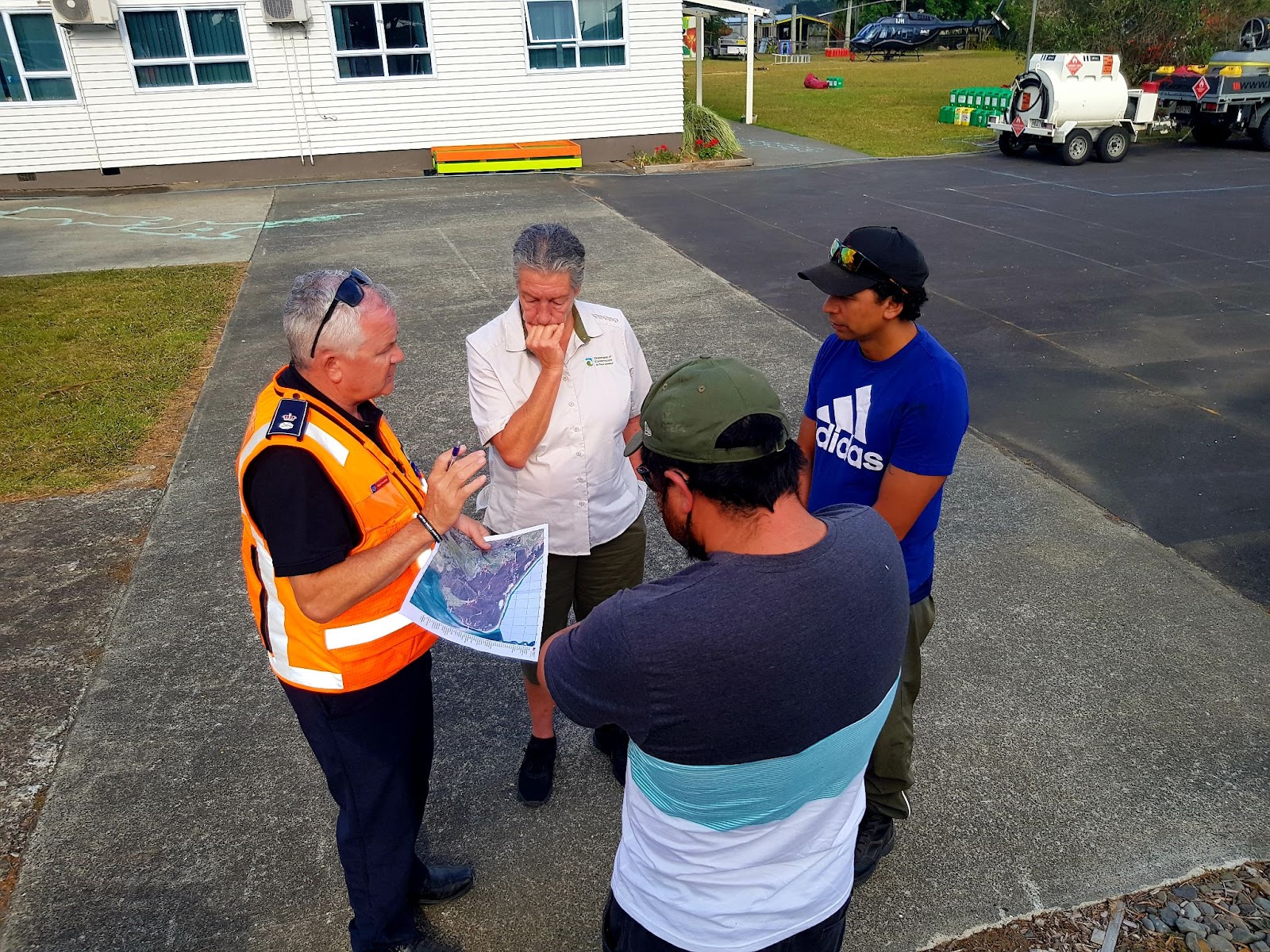 This fire is the second for Kaimaumau who faced a large wildfire in 2018, so the community and iwi are experienced in working with preventative measures and fire management. There were fire breaks in place prior to the fire beginning in December. Hooper and Rippingale discussed that the water supply access would be granted to emergency services which is located on iwi land, to help build more fire breaks and put further preventative measures in place in order to combat the fire.

“The protection of our whānau in Kaimaumau is paramount. Making sure we put measures in place to ensure catastrophic destruction like this doesn’t happen again in the future. It is very reassuring to see new sprouts of greenery already growing within the wetlands” said Hooper. 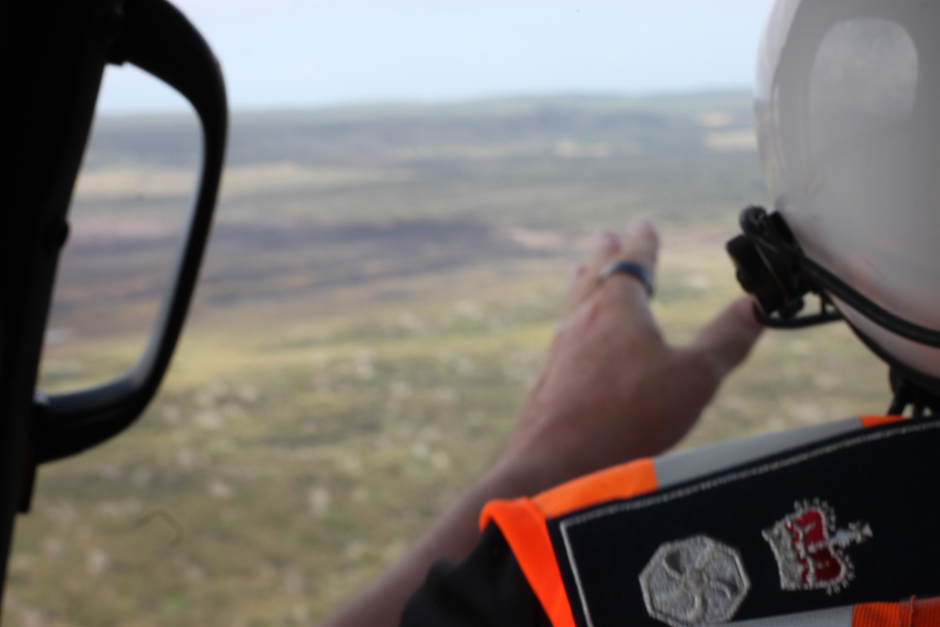 A number of culturally significant sites have been damaged in the fire including historical burial sites such as 'Muiata Pā' and the only freshwater wetland in Te Tai Tokerau that exceeds 1000 hectares, 'Kaimaumau Wetland'. The environmental and cultural impact on Kaimaumau is significant. 'Ngarui o te Marangai' or 'Takahua' (East Beach) connects Houhora to East Beach and was most affected by the fire. Koiwi continue to be exposed by the beach when the sand shifts and they are reinterred further inland.

"Takahua is here. Across the other side is Rangiputa and we all used to stay down here during the summer. We used to pick up all the bones along these sand hills. Mind you, these sand hills seem to be coming towards us a bit more now. Used to be way back there. But we are still finding bones. Human skletal, along here" - Whare Mehana ('Ngai Takoto Sites of Significance Report' by the iwi Ngai Takoto (2010)).

The cultural and historical significance of this area is rich. Some of the eldest tūpuna bare the names of 'Rangiputa', 'Kaimaumau' and 'Wharemaru'. The whakapapa of these descendents live to tell the stories of the past alongside their tupuna rakau, named 'Hakea', which stands at 'Wharemaru Pa'. Significant because this is where the pito of tūpuna were burried. A cutting from this rakau was also grown infront of Wharemaru Marae.

Ngai Takoto and the Department of Conservation co-manage the land in which the Significant Natural Area (SNA), known as Kaimaumau Wetland, is located. It comprises of Motutangi Swamp, Otiaita, Lake Waikaramu and Waihauhau Swamp. 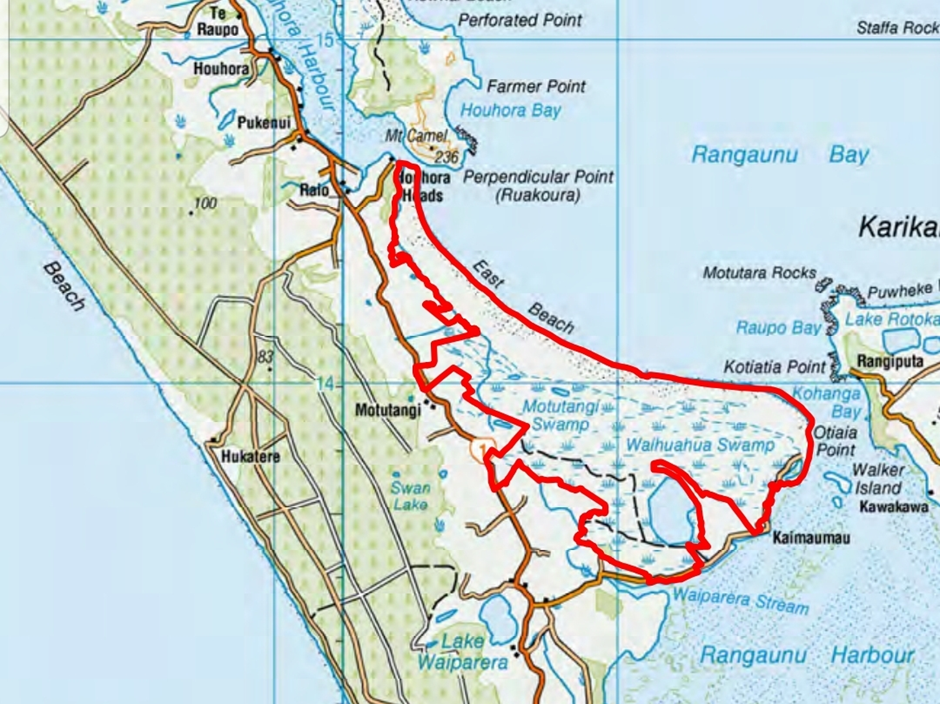 Aroha Hughes of the Department of Conservation elaborated on the ecological impact to Radio New Zealand.

“There are a lot of sacred sites in the area, like burial grounds but they were also concerned about the orchids and mudfish species that were at critical levels. There are not only native species in there, we have some weedy species too like wattle and hakea which has been brought in by other people. Those plants love fire and so it is a race for the department to make sure they don’t take over the place during recovery” said Hughes. She told Stuff that the fire is expected to burn beneath the peat for another six months and it is likely to take a 10 year restoration plan to bring new life and health into the area.

Lennon Rippingale is the lead spokesperson for the Kaimaumau community and is also the Chairman for Wharemaru Marae. He liaises between government and emergency organisations and the local whanau of Kaimaumau. He explained that there will be a lot of work to make sure all koiwi (bones) are returned to their natural resting place and strict tikanga must be followed. 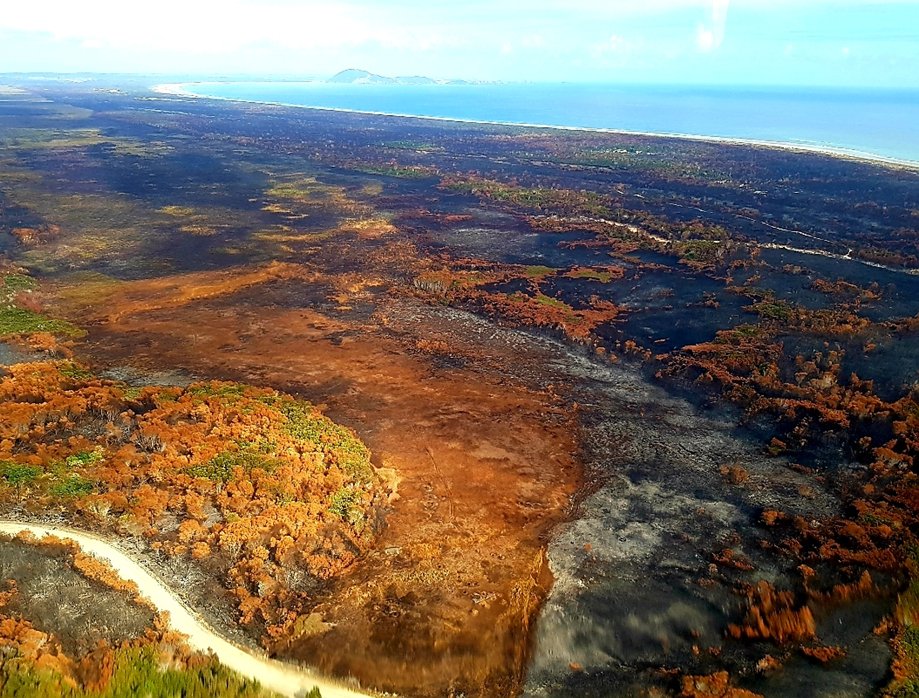 View over damage in Kaimaumau.

Discussions will continue between emergency departments, government agencies, Kaimaumau residents and iwi to maintain a firm grasp on the situation, to ensure preventative measures are put in place and to ensure conversations continue on after the fire is under control. The Department of Conservation will implement a ten year restoration plan alongside Ngai Takoto to bring new health back into the damaged area.

Resilience in Basketball amidst Pandemic

Matariki and Puanga Acknowledged With Own Public Holiday

Innovative thinking within Māori communities encouraged whānau to get vaccinated during the height of COVID-19
2 months, 3 weeks