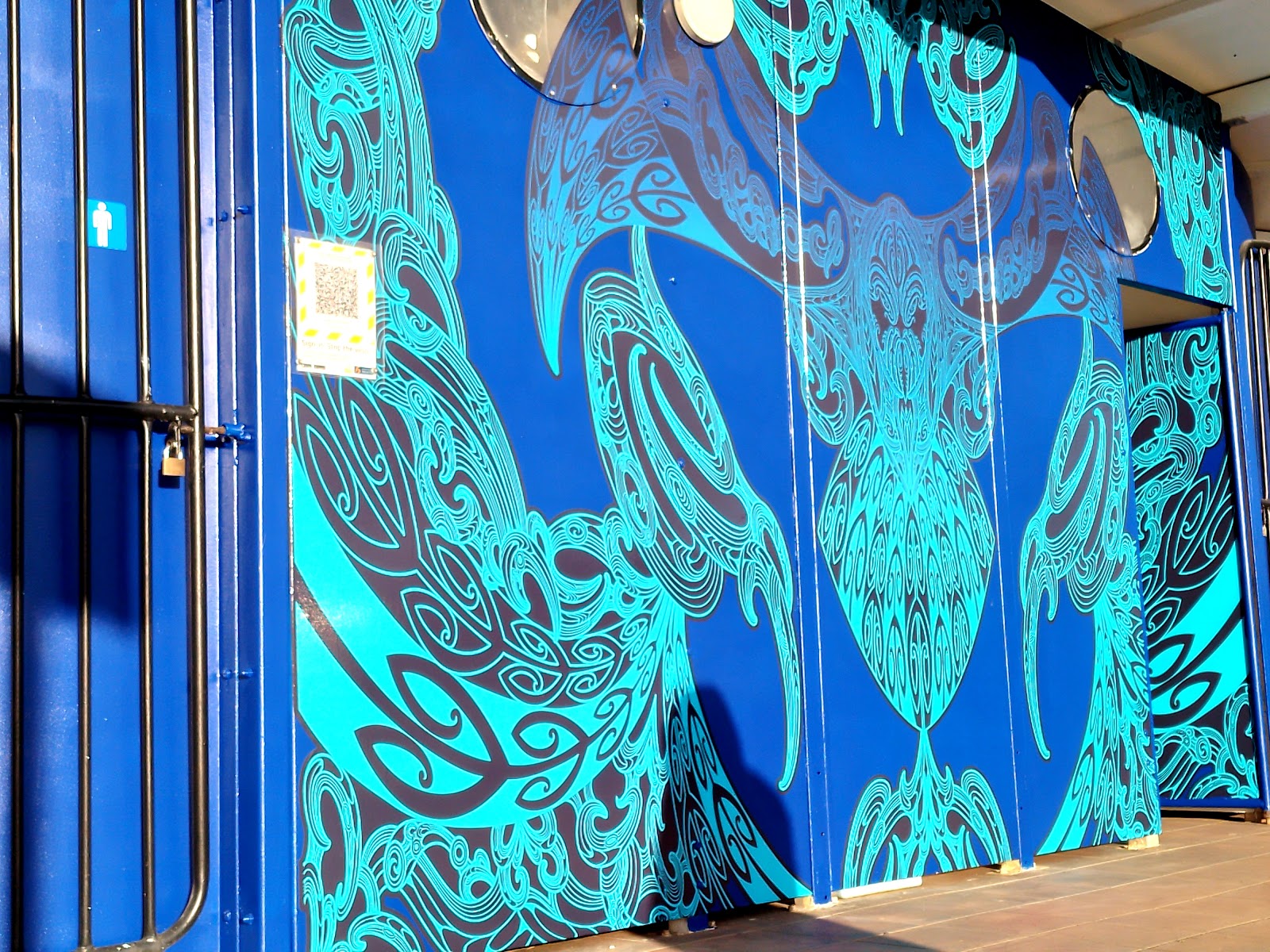 The Awanui township has undergone a well deserved transformation and is a true reflection of communities, government and iwi working together. The Te Hiku Revitalisation Project has brought new life to many communities across the Far North and the Awanui township is one of the most recent reveals.

Māori Erstich has incorporated his mahi as a Māori Visual Artist, on behalf of Ngāi Takoto, to this project. Awanui sits within the rohe of Ngāi Takoto, one of the iwi to which Erstich belongs. Erstich is the mokopuna of Angel and George Erstich, two well known Awanui and Oturu community members. George was the son of Kataraina Matenga and Ante Erstich. Kataraina was the daughter of Herepete Matenga and Irihapeti Awarau. Māori's father, the late Pou Erstich, was a key figure in the revitalisation of te reo Māori, Te Kawariki movement and key iwi kaupapa for Ngāi Takoto.

It is only fitting that Māori's magnificent masterpieces adorn the newly unveiled playground and are also weaved throughout the revitalisation of the Awanui township in representation of his iwi and tūpuna.

Māori recently graduated with a Post Graduate Diploma in Māori Visual Arts from Massey University, and was committed to exhibiting his mahi at Roma Marae when the newly revitalised Awanui playground was unveiled. 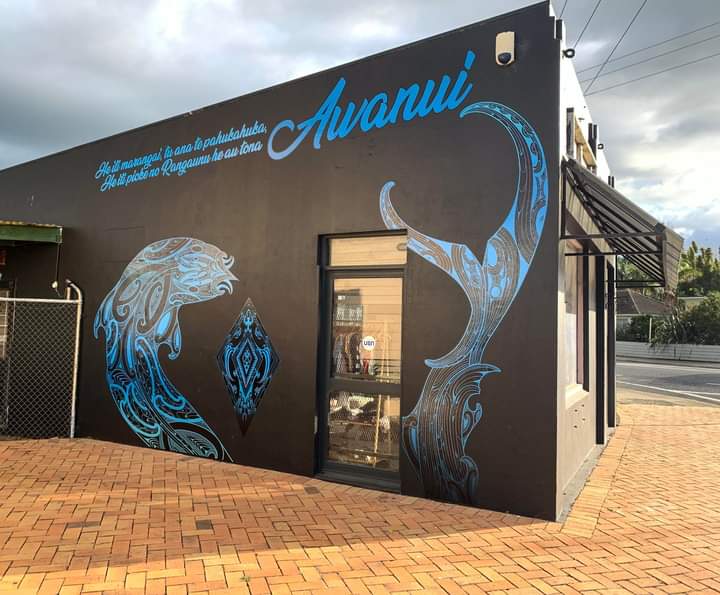 Erstich represents Ngāi Takoto in this space and has contributed greatly to the revitalisation of the Awanui township. Signature touches include the plaques added to the new garden boxes which have been installed outside the Awanui Hotel and along the township footpaths. These plaques have the pioke cut into them to symbolise the Ngāi Takoto whakataukī. A stunning mural by Māori is also displayed at the entrance of Awanui from SH10, with pouwhenua soon to be unveiled. 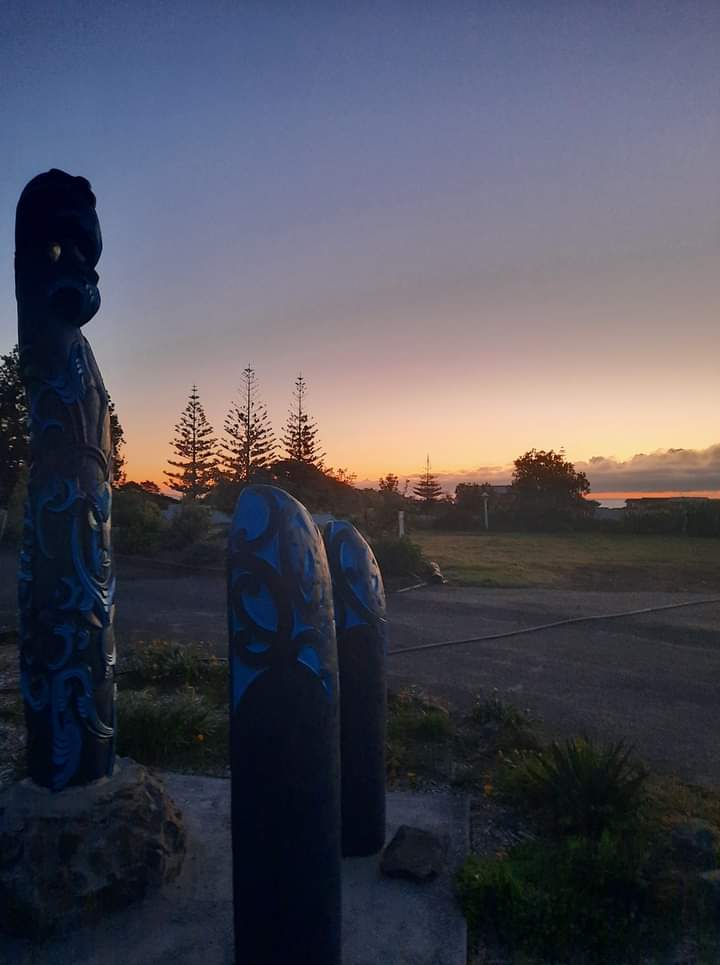 Māori has also contributed to many other iwi displays, including the creation of the pouwhenua situated at the entrance of Ngapae Holiday Park. These pouwhenua represent Tangaroa and the waka that traversed the rough seas of the west coast. They were unveiled in March 2020 before the very first lot of manuhiri were welcomed onto Ngapae Holiday Park during the Snapper Bonanza fishing competition. 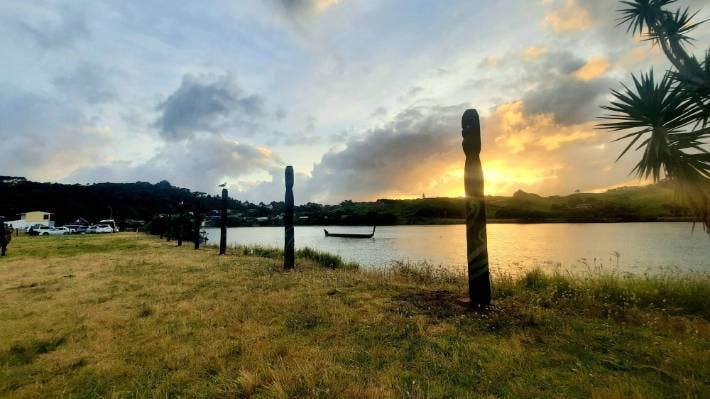 Another great feat for Erstich are the pouwhenua that line Te Ikatiritiri in Taipa (also known as Wharewaka and Maheatai).  He carved the pouwhenua that line the estuary and were put in place during the successful reclamation of Ngāti Kahu whenua at 55 Taipa Point Reserve. Wikatana Popata spoke to Te Hiku Radio about the journey of successfully restoring Maheatai  into the ownership of Ngāti Kahu. 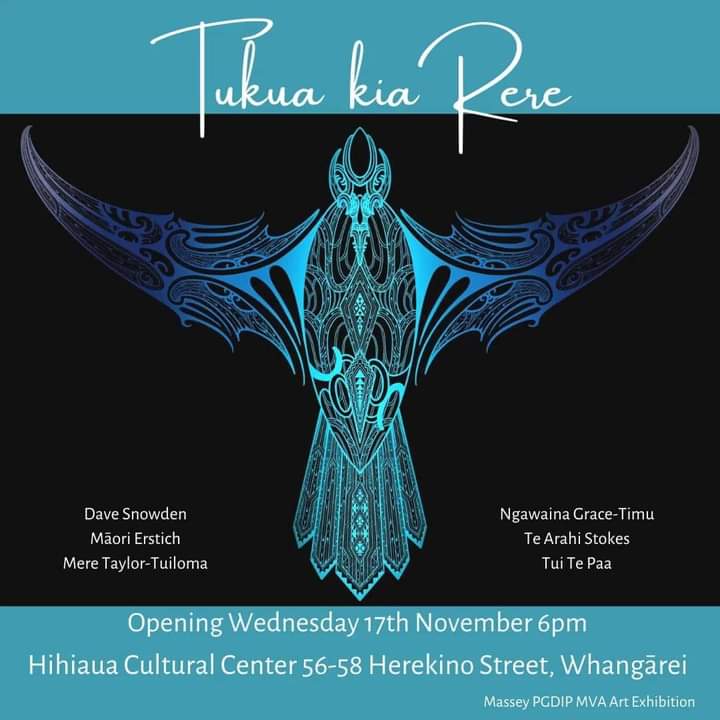 Erstich has been part of a number of exhibitions which include;

He is multi-talented, having an ability to draw, carve and create modern pieces instilled with the teachings of the past. Māori encourages rangatahi to find someone in the field to learn from and to study;

"Draw, just keep drawing. Drawing is the foundation for all Māori visual arts, so draw till your hands get sore then draw some more. Also study or find someone in the field you want to pursue to learn from." 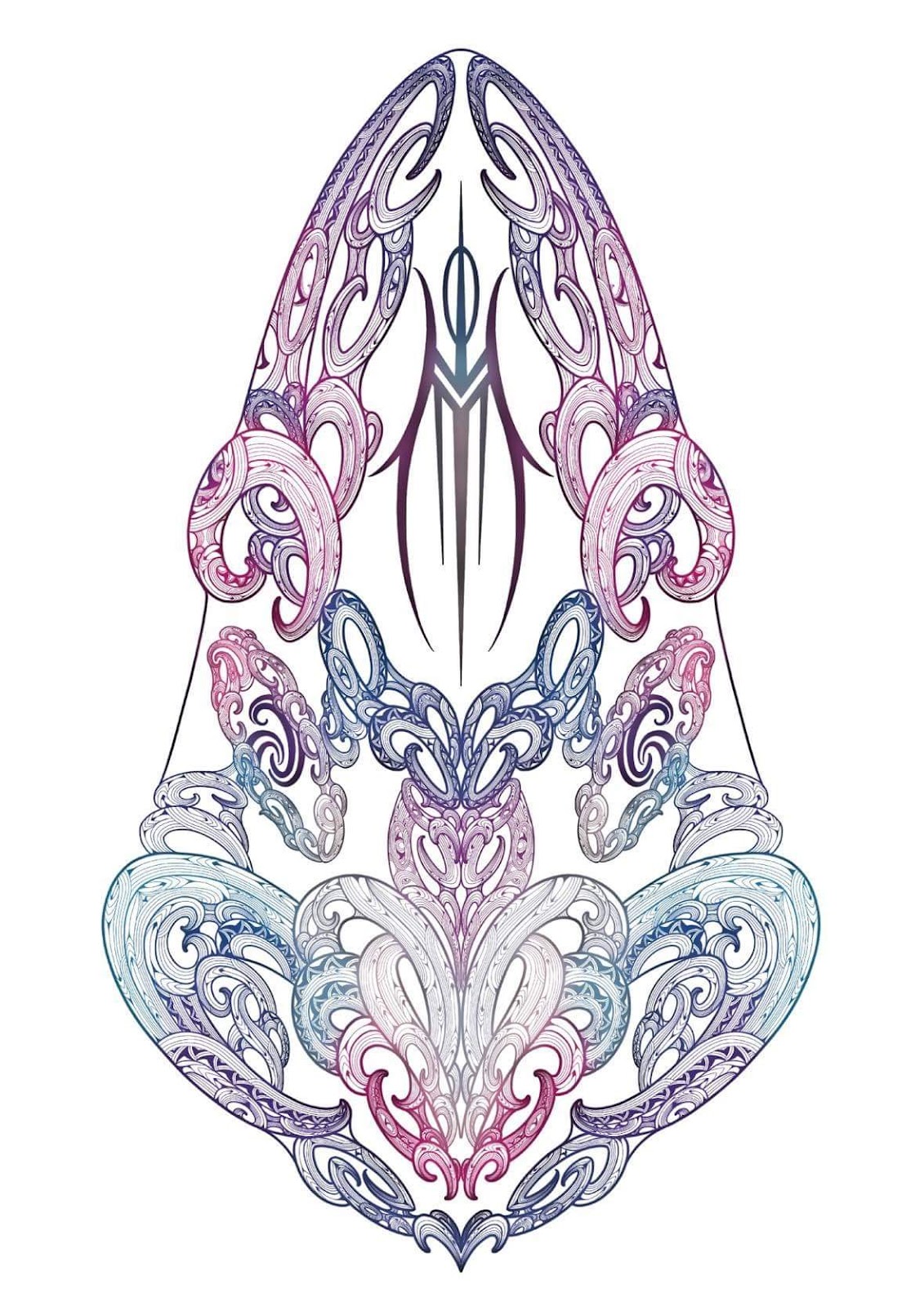 Māori has many projects to look forward to and is set to complete his Master's Degree and is an inspiration and example for those who have a creative passion and are sitting on the fence about how to make a full-time career out of it.

"I draw inspiration from a lot of places. Our environment and surroundings, historical narratives and the works of old. It’s hard not to be inspired by the level of craftsmanship our tūpuna put into their work" he said. 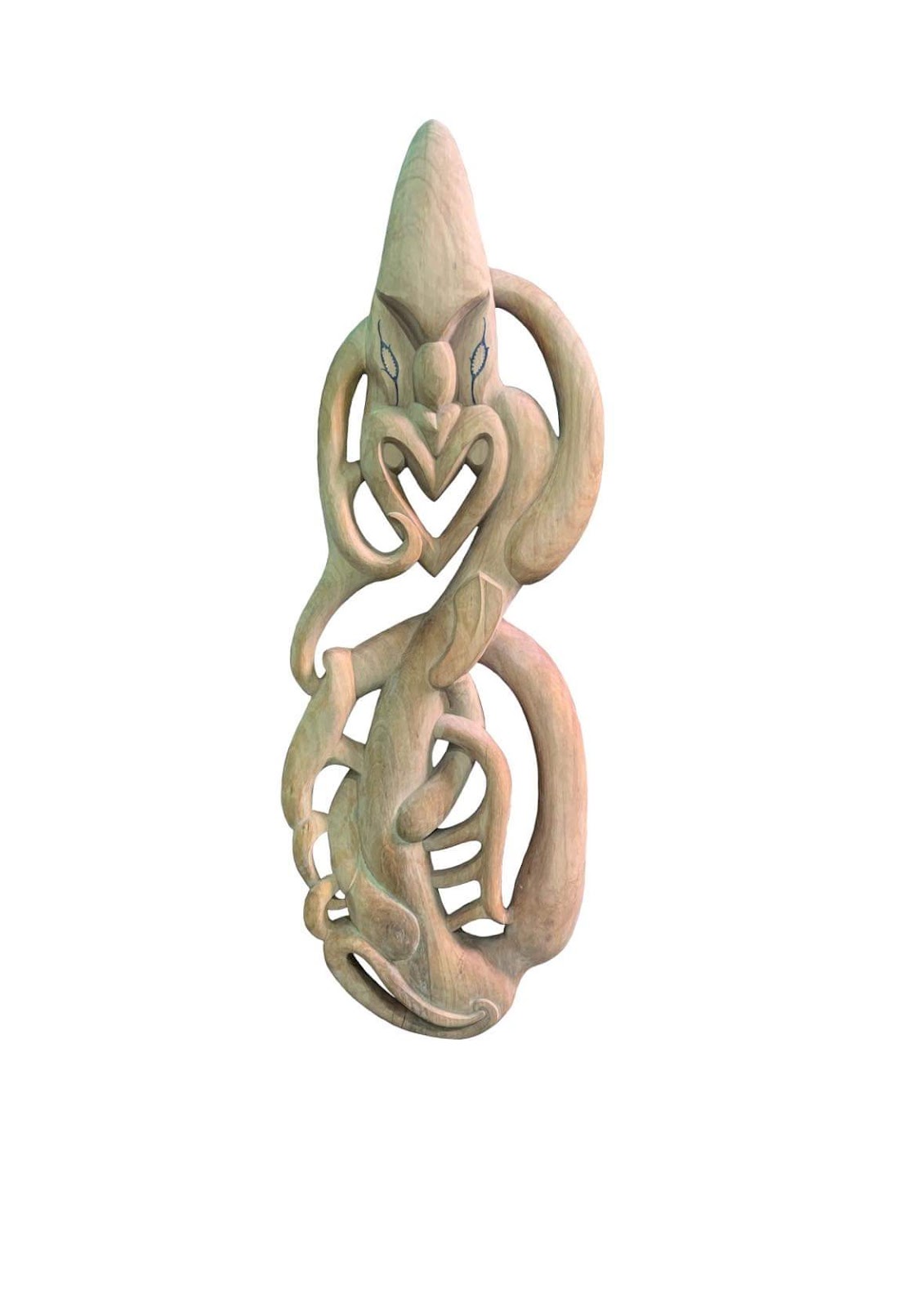