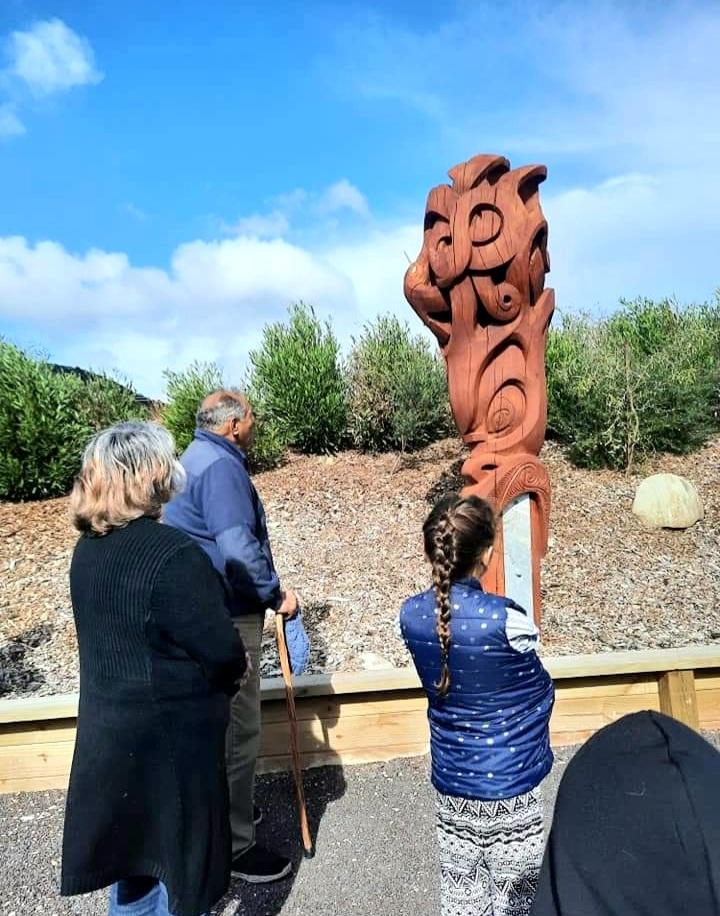 Te Hokianga-nui-a-Kupe (the place of Kupe’s great return), the Hokianga Harbour, was the landing place and final departure point of Kupe, over 900 years ago. He made landfall here from Hawaiiki on the waka, Matahourua, and settled in Hokianga in approximately 925AD. Hokianga is a significant area enriched in powerful history, mana and the discovery of our nation. Opo the dolphin has a statue here and the beloved late Dame Whina Cooper has her statue across the harbour at Waipuna Marae, Panguru. The Hokianga is also known as Te Kōhanga o Te Taitokerau (the nest of the northern people) or Te Puna o Te Ao Marama (the spring of the world of light).

Manea, The Footprints of Kupe, is an award-winning, multisensory, world-class cultural centre, built to preserve and tell the magnificent story of Kupe's discovery, overlooking Hokianga Harbour. 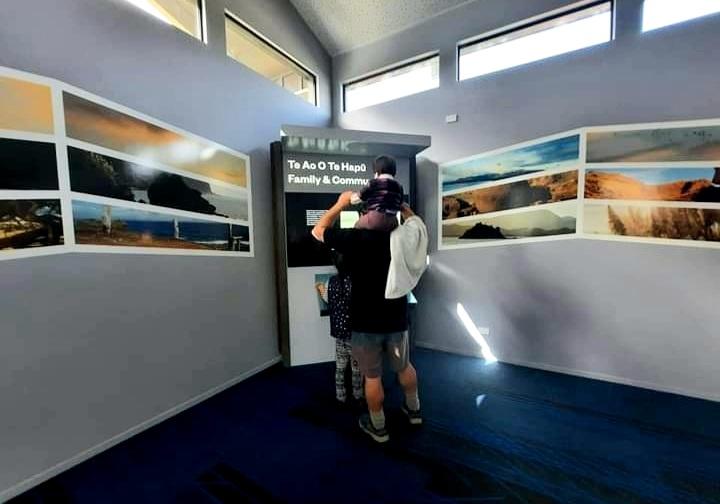 Upon arrival, you are greeted with a mihi and then led through to the waiting room where you are immediately captivated by the digital screens that provide a multi-dimensional overview of the local history.

The screen that plays a video of the kūmara grown at the bottom of maunga, Whiria, moves from bright colours to greyscale. The fluidity of time progressing over centuries transitions before your eyes as the past is brought forward into the now.

This part of the building showcases a historical timeline of events using modern technology, you can’t help but feel intrigued by the powerful digital displays. Stories of old are told through enriching sound and visual imagery, and each display is a purpose of passing knowledge on to the next generation. 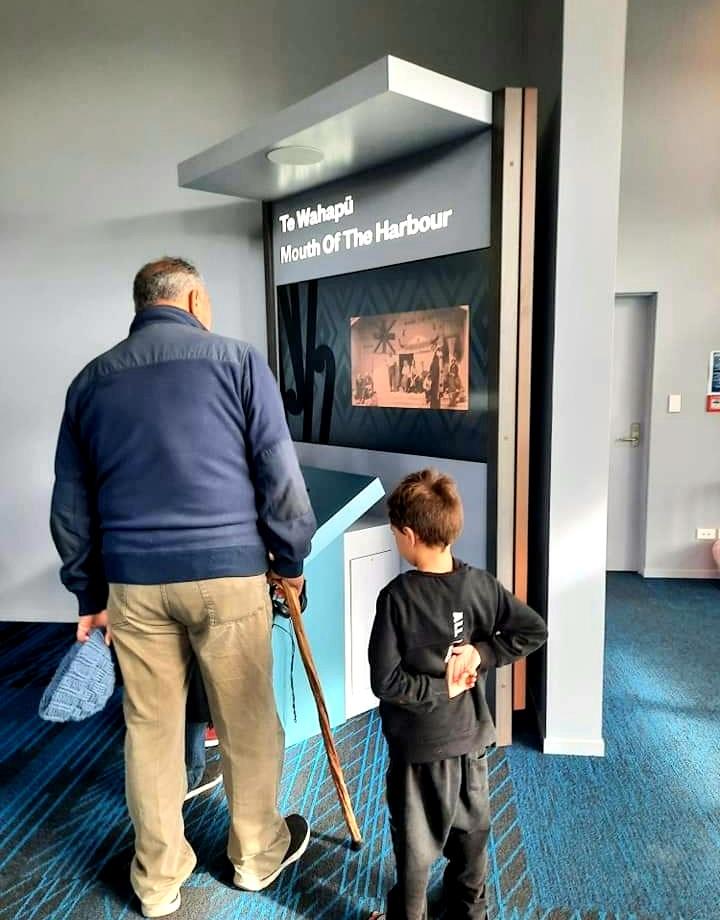 Visitors are led through the garden area, landscaped on one side to represent Tāne-mahuta, with grasses and shrubs and then the other side represents Tangaroa. There are carvings that represent each atua, lining the pathway toward the cinema. Once you reach the cinema, you are greeted with large screens that stand almost 4m high and 11m wide.

“Like a multi-medium piece of moving textured artwork, layering each chapter upon each other, we watched Kupe's battle with Te Wheke-o-muturangi in awe. Our hosts performing in beautiful korowai and piupiu narrated the journey to give the viewers a human connection to the story being shared through the screen. We were engaged by the performance from beginning to end. Seaspray burst through the crowd as waves splashed and the waiata left an impression on our hearts” said Keryn Pivac, a recent visitor to the centre.

The Manea Footprints of Kupe Centre also engages students and provides an enriching learning environment for kura looking to immerse themselves in the history of Kupe, iwi narratives and the revitalisation of whakapapa.

Maria Barnes spoke to Te Hiku Radio about the suitability of such a location as an educational experience and allows schools to interact with the history of one of Te Taitokerau's paramount tupuna, Kupe.

"The 75-minute multisensory journey includes storytelling that is presented through art, taonga, film, and performance, and is set in the beautiful Hokianga. An opportunity to share significant stories of Kupe and highlights the importance of the history of Hokianga."

This centre has created employment opportunities, it preserves history for future generations and it teaches other cultures about the significance of this place and of Kupe.

There is also a monument at the entrance of this centre that acknowledges those who died and whose tūpāpaku went down in the SS Ventnor sinking in 1902. Several crew members died also, they were tasked with the job of repatriating the bodies of 499 Chinese miners who had lost their lives while in Aotearoa. The Provincial Growth Fund granted $100,000 to build a memorial for the lives lost in this tragedy.

Many hands have made this memorable experience possible for the descendants of Kupe to tell the story of their tūpuna and his journey. The physical aspects of the centre, alongside each role played by the kaimahi, brought this extraordinary narrative to life.

The final piece to this experience brings visitors to a platform which boasts two proud carvings that represent Nukutawhiti and Ruanui. Nukutawhiti, captain of Ngātokimatawhaorua, and Ruanui, captain of Mamari first landed in Hokianga from Hawaiki.

The proud carvings of these two tūpuna stand tall, overlooking their rohe and descendants as the final chapter of the Manea experience. 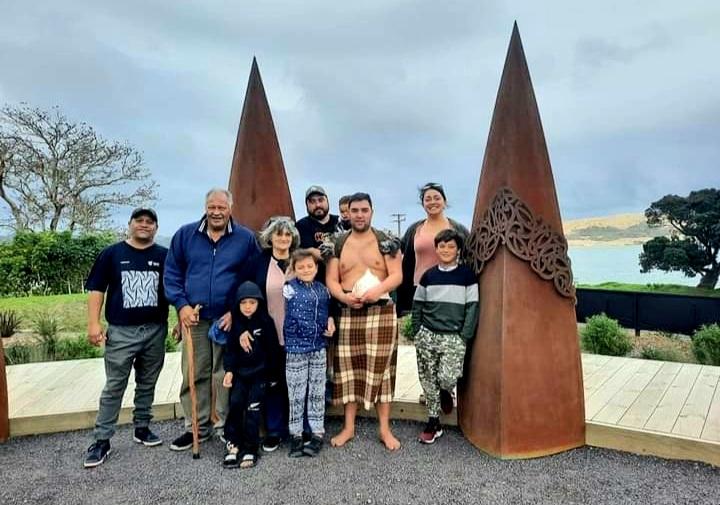 For many generations, plants such as kuta and raupō have been harvested from Lake Ngātu.
1 month, 1 week