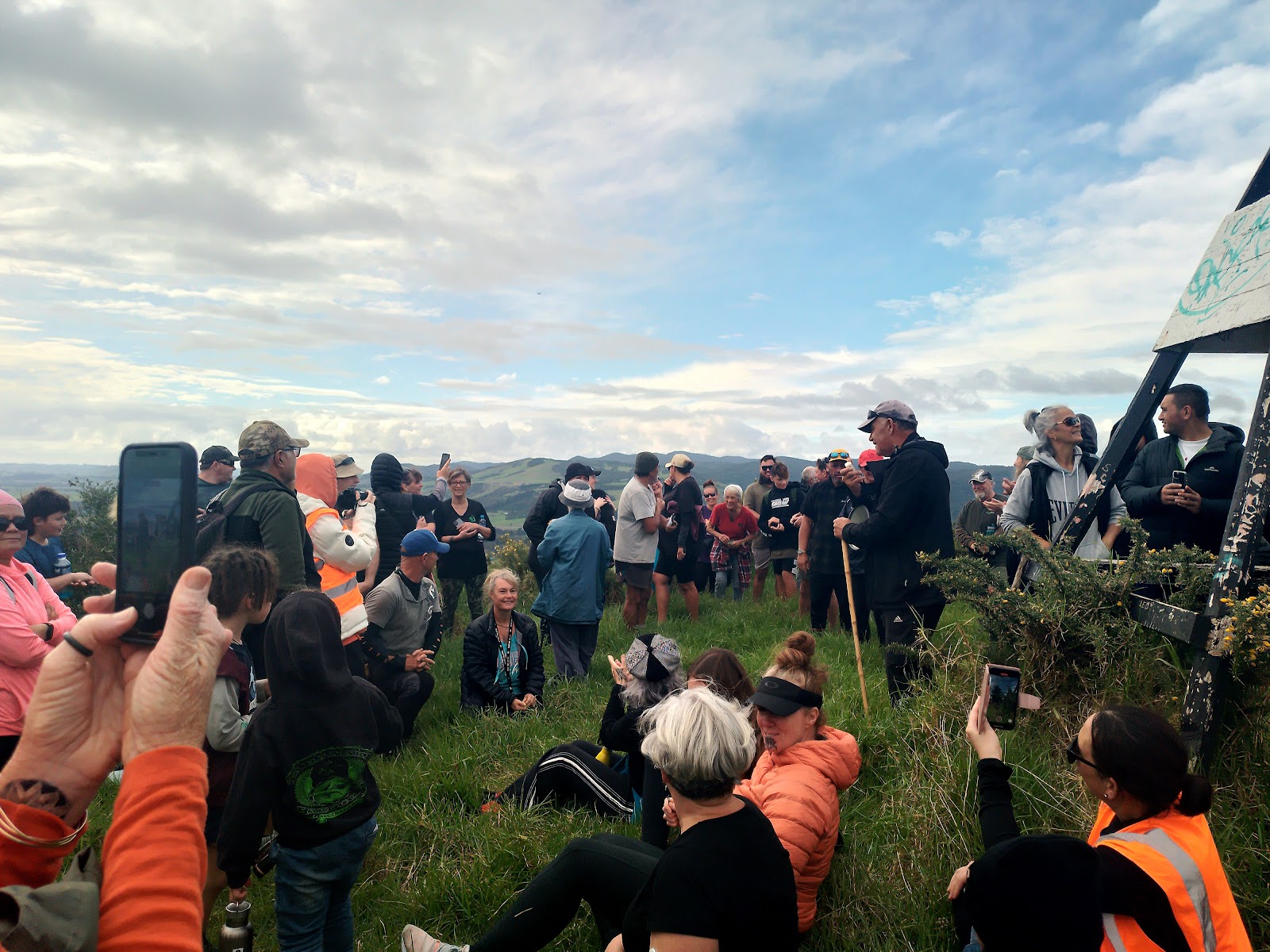 The Matariki ki Ahipara festival was held over three days from the 24th-26th of June in celebration of the Māori New Year.

A range of exciting community-based activities were organised by Te Rarawa Kaiwhare, Ahipara Aroha and Roma Marae in commemoration of the Matariki star cluster and Puanga.

The Pleides star cluster, also known as Matariki or 'the seven sisters' rises in the northeastern sky from June to July, marking the start of the Māori New Year. It is a representation of remembrance, peace, giving and new life through planting, remembering loved and lost ones, giving and celebration.

"Puanga is the star of the first magnitude and Matariki is a cluster of the sixth magnitude and fainter. It's far easier to see Puanga than it is to see Matariki, which is why some iwi choose to celebrate Puanga" explains Ian Cooper (Vice President of the Phoenix Astronomical Society).

Matariki and Puanga have been recognised by Te Hiku tūpuna for many generations as a significant time of year. Star navigation was also a traditional practice used for voyaging where the seven sisters would guide waka successfully to their destination. The main tool used to align certain stars and guide waka along a journey to a destination was the sophisticated star compass.

Muriwhenua history tells us of the great voyages made by Kupe, an intrepid ancestor who was the first to reach Aotearoa using the stars and currents of the moana. A wayfaring craft that was continued on by the late Sir Hekenukumai Puhipi (Ngāti Kahu, Te Rarawa, Ngāti Kuri). A well-known accomplished master navigator who built the waka, Te Aurere, who kept te reo Māori and mātauranga Māori alive whilst using his own crafted star compass to navigate his many waka journey. This waka traveled over 30,000 nautical miles visiting the Cook Islands, New Caledonia, Hawaii, French Polynesia and three times around the north island.

Star navigators used the arcs of the sun and could calculate when different stars would be passing different points in the sky at different times and heights. This relied on the time of the year. The rising and setting of the stars helped align the waka in a direction of travel through the night until the sun rose again. The sun was used at dawn and dusk (Voyaging from the past into the future, Education Gazette). 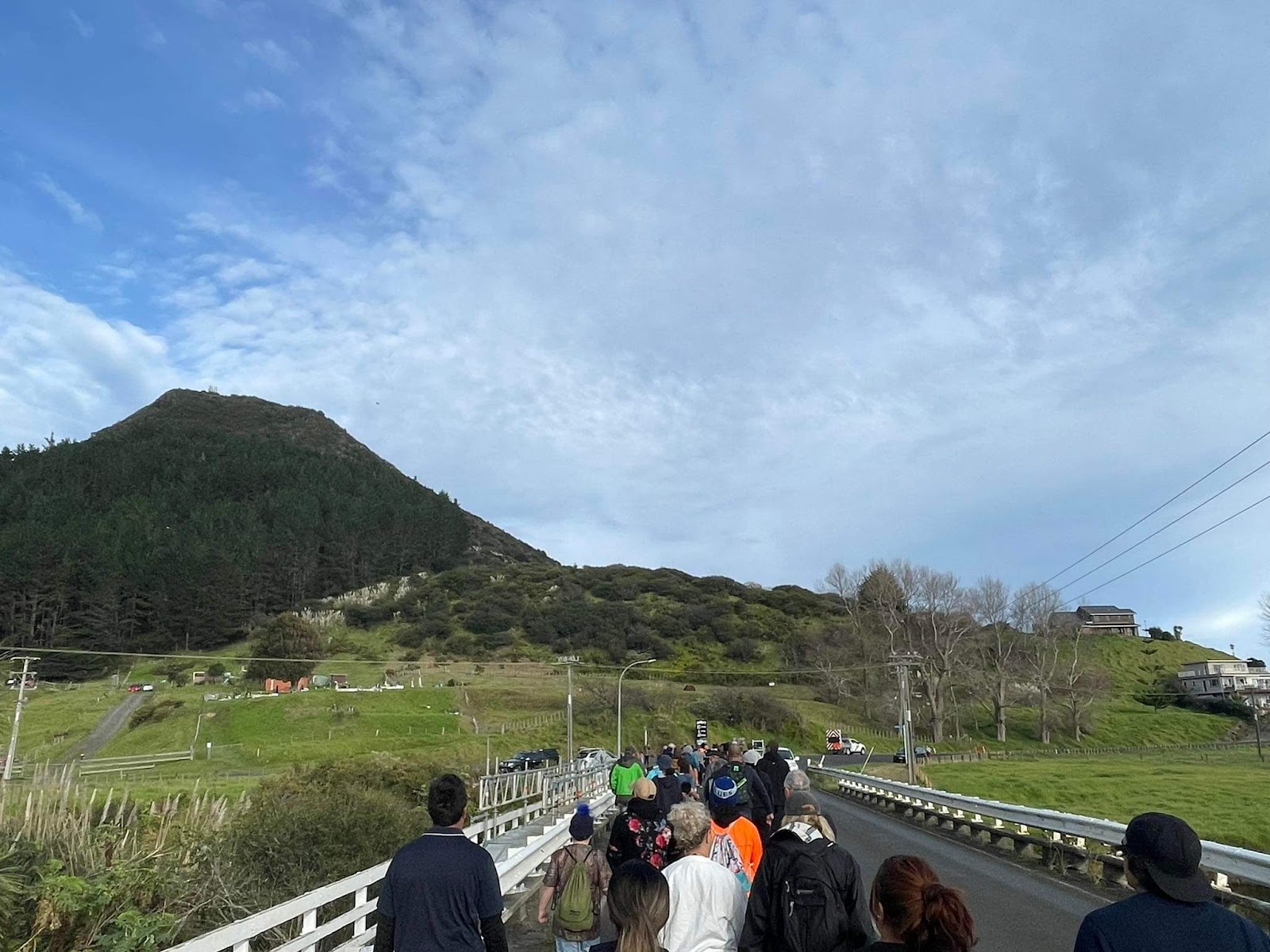 With less restrictions than during the pandemic, the first ever public holiday for Matariki was well celebrated in Ahipara, as well as across Aotearoa.

The Matariki ki Ahipara event commenced with an early morning karakia 'Whakanui i a Matariki me Puanga' on the beach, followed by a food market at Paripari Reserve, an art display, a winter dip in the moana, a planting day, a sand art display and future planning for te iwi o Te Rarawa.

One of the main activities of the festival, was a morning hīkoi up the maunga, Whangatauatia, a culturally significant site for te iwi o Te Rarawa, with a history commentary by Hone Paitai.

Approximately 300 keen walkers enjoyed the summit, with registrations and the starting line held at Te Rarawa Rugby Club. The clouds parted and the sky cleared for all to enjoy the hīkoi without the cold gusts or rain. There were pēpi, children, teenagers, whānau groups and the eldest participant, 80-year-old Ima Grbich, a much respected former teacher within Te Hiku, who received a round of applause at the top of the maunga.

Hone Paitai spoke of the history that adds richness to the Ahipara surroundings, giving small commentary along the hīkoi and a fully informative kōrero at the top of Whangatauatia;

"One of the many battles between Te Aupōuri and Te Rarawa was the battle at Honuhonu. This was where the chief of Te Aupōuri, Te Kaaka, was killed. Te Kaaka's niece, Whangatāuatia, stood in front of his slain body to protect him from being further desicrated. Impressed by her bravery, the chief of Te Rarawa, Poroa, decided to call an end to this battle and drew a line in the sand here to distinguish their boundaries. As part of their peace agreement, Poroa took the Te Aupōuri ancestress to be his wife, naming his pā site after her."

Whangatāuatia, the maunga, also had two other names, these were Morehurehu and Te Whakaraupa a Ha.

Hone spoke of Te Rarawa chief, Poroa, and how the moana and surrounding areas used to be highly regulated;

"Everyone knew back then to only take what you needed. Anyone who chose otherwise would be taken to execution rock, at the foot on this maunga. Today, you have councillors helping people who get caught taking twice the limit, not once, not twice, three times or four times."

There is a large platform shaped boulder that sits at the walkway up Whangatauatia. There’s an eerie wairua as you walk by in wonder of what may have happened in the past here. 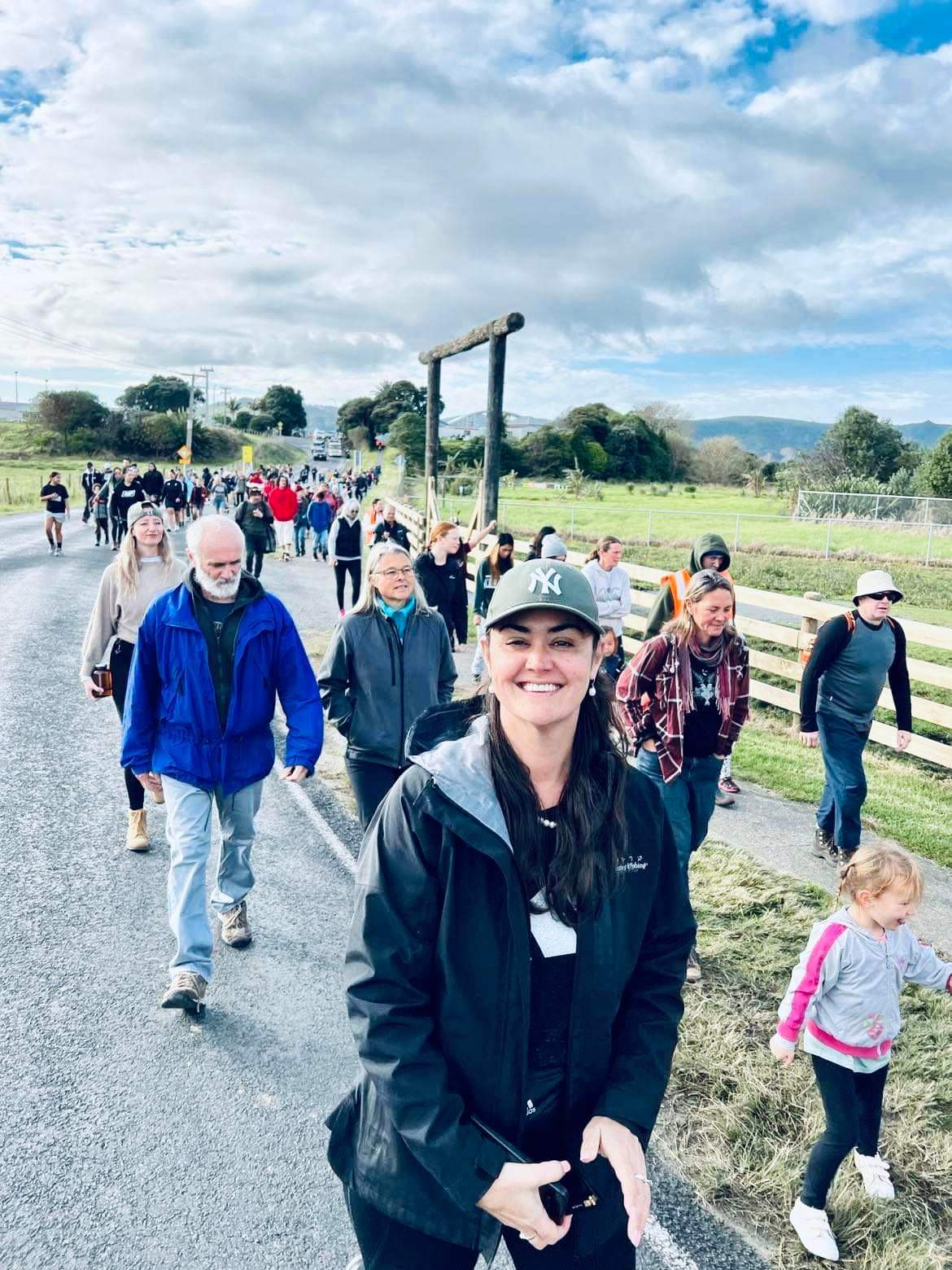 Councillor Felicity Foy enjoyed the hikoi and spoke of her involvement in the exciting projects happening in Ahipara;

"Te Hiku Community Board, that I am part of as the councillor rep, gave the funding for this Matariki event. So it was so good to see it come to reality." 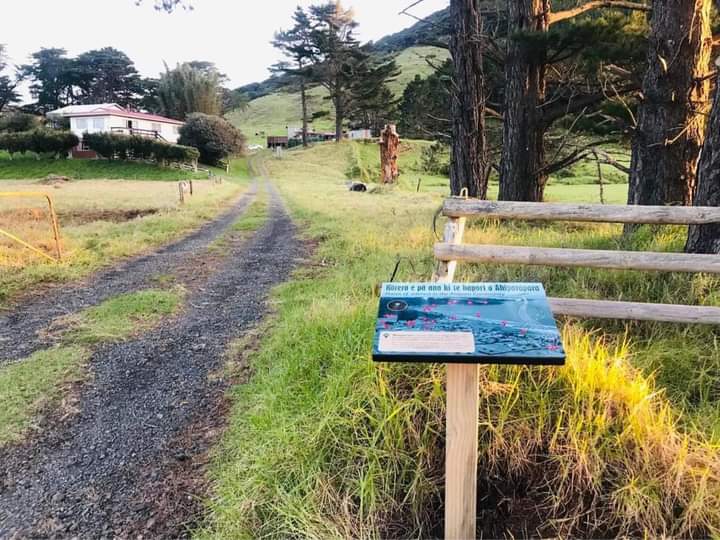 The latest addition to the Ahipara community are the information plinths placed at every significant site, marking and informing those who stop to read them why certain places hold cultural significance. They complimented the hīkoi and gave participants a better insight into surrounding narratives. 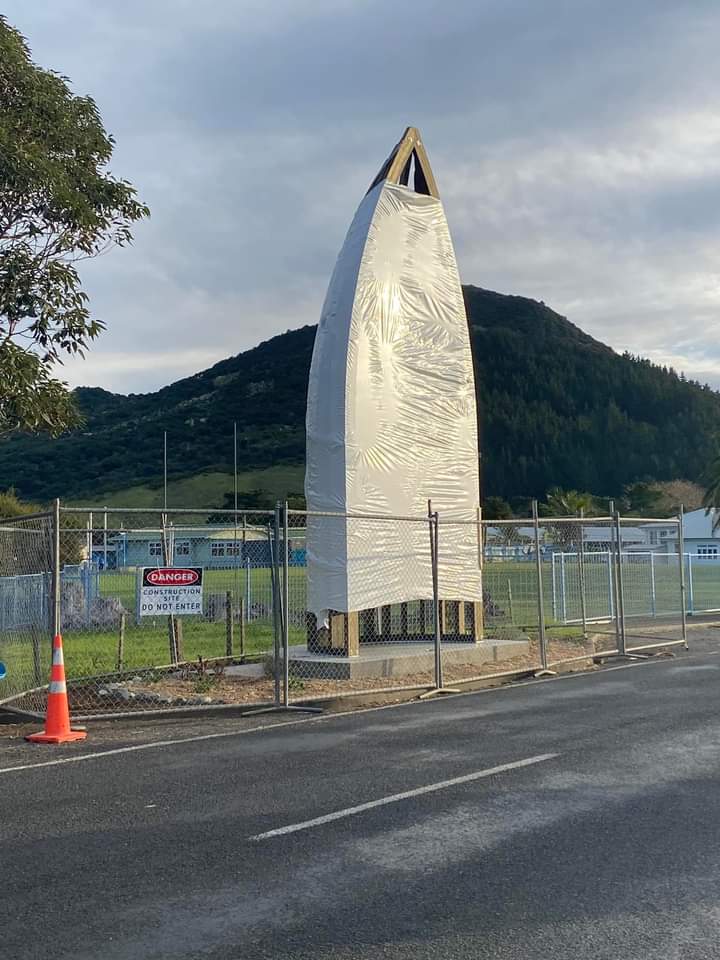 The gateway to Ahipara now boasts two magnificent cultural monuments soon to be unveiled. It is one of many great projects that reflect a great example of collaborative efforts between local iwi, Far North District Council, Te Hiku Community Board and the many partnered organisations with a vision to rejuvenate beautiful communities. 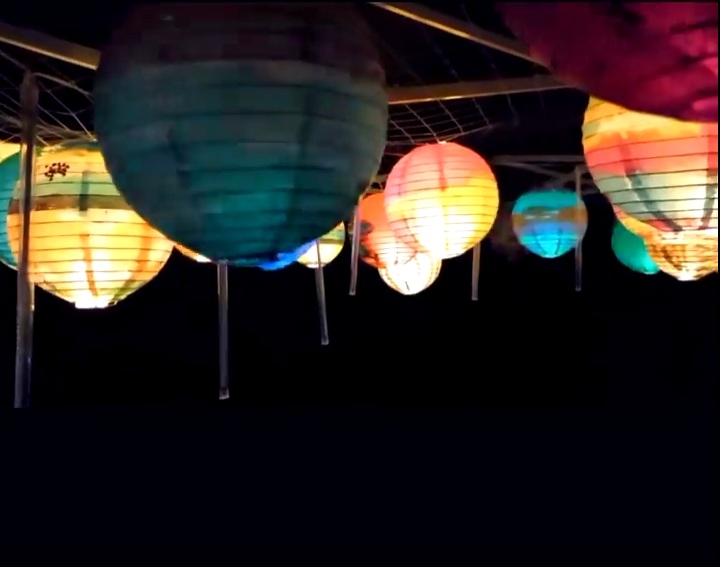 The final display of lights that represented Matariki, the star cluster, were curated into an intriguing walkway along the new pump track in Ahipara. This activity definitely marked the Māori New Year in style, whilst providing the community with a memorable and valuable experience. Te Rarawa provided a great example for many other communities to follow as we acknowledge this time of year more, as Māori, and as a nation, moving into the future.

For many generations, plants such as kuta and raupō have been harvested from Lake Ngātu.
6 months, 3 weeks