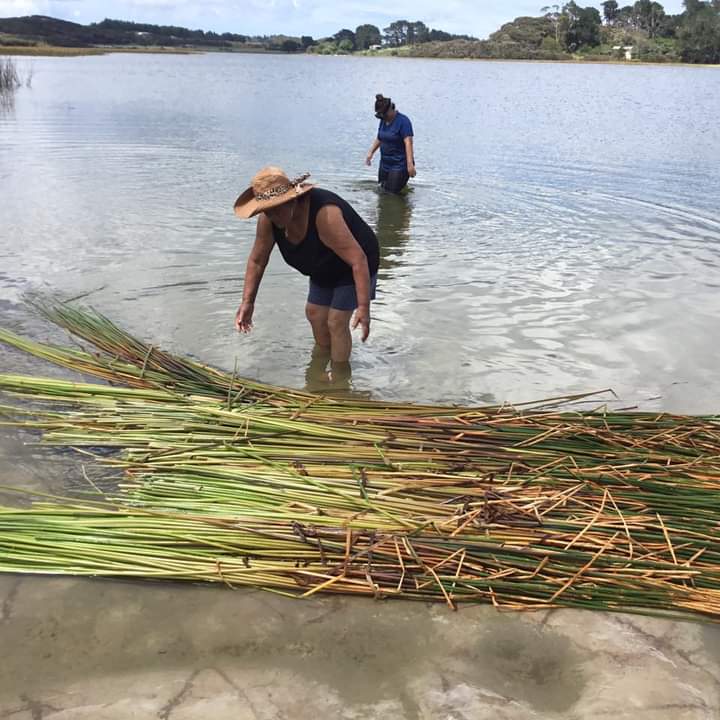 Despite dune lakes being uncommon around the world, there are many in Aotearoa, and specifically in Northland. Lake Ngātu is a dune lake that has been a significant area for Māori for many generations. It was created by the movement of historical sand dunes that created a hollow pit over time and then stabilised.

Rangitane Marsden explained in a Haukāinga interview that Lake Ngātu was named after Pukengātu, which is situated nearby. 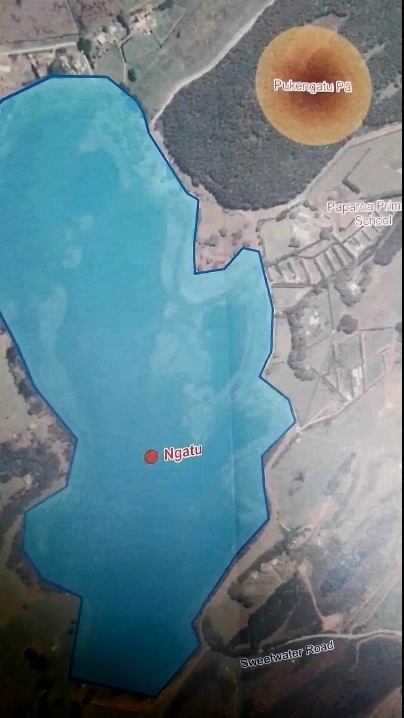 The Significant Sites Report for Ngāi Takoto details that;

Lake Ngātu derived it's name from the nearby pā after the battle at Te Rangianiwaniwa. Te Aupōuri retreated towards the beach and stopped to wash their wounded and their dead killed in this battle, in Lake Ngātu. They then went up the beach at Ngāpae. From this time, the name of this maunga (Puke Ngātu Pā) for te iwi o Ngāi Takoto, was applied to the lake. 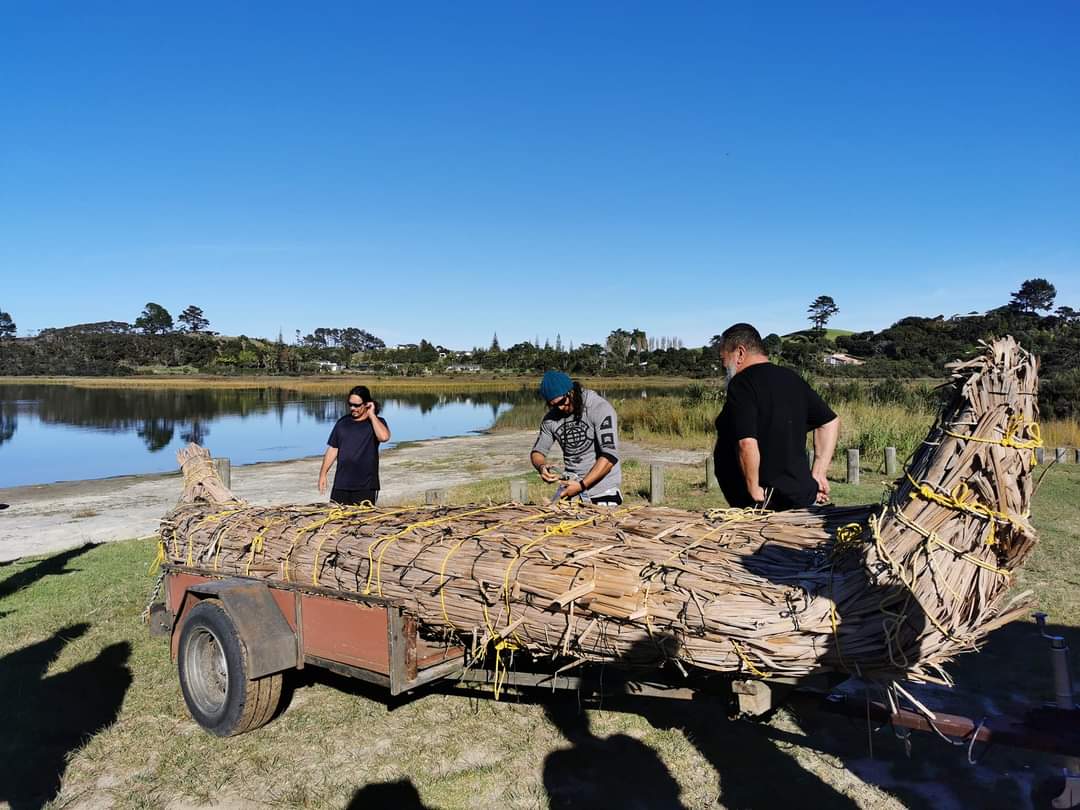 WAKA MADE FROM RAUPŌ (PHOTO SUPPLIED)

Lake Ngātu has provided plants and other resources used for weaving items like mats (tāmata), cloaks (korowai) and bedding (moenga). These resources were easily accessible to local iwi, Ngāi Takoto, due to its proximity to local settlements.

In particular, kuta has been collected from Lake Ngātu for many years. Haukāinga spoke to Joy Wikitera about her weaving mahi and her process in 2017;

"Kuta has a job as a water purifier. That's its main job. In some places, it's called paopao, but here we call it kuta. You can make hats, capes and at Te Rarawa marae, we have it lining our walls" said Wikitera.

These practices have been around for a long time.

"I remember when an old Bedford truck would pick the entire lane up (Waimanoni Lane) as kids. Then we would go to Lake Ngātu. We would swim, enjoy kai, help pick kuta and then watch our Nannies and Aunties weave the kuta they had dried earlier into mats for Waimanoni Marae. There were so many people, all of us - together, these were the best times" - Pera Pivac (Ngāi Takoto). 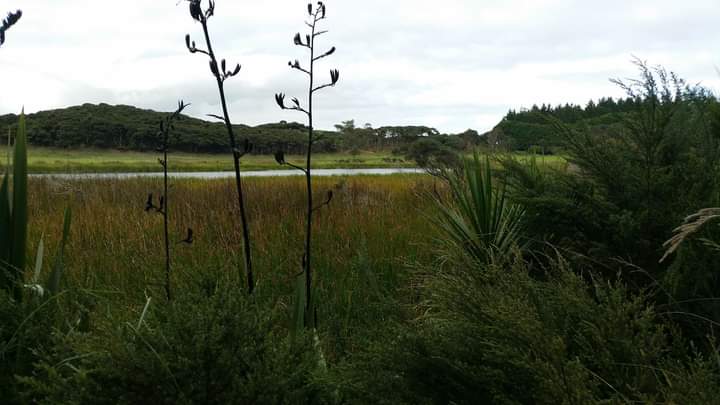 Over time, the water quality of Lake Ngātu has been impacted negatively due to a range of events such as invasive weeds taking control and suffocating the 'good' plants that act as natural water filters and purifiers. Water quality was also affected by boats stirring the floor. Other activities that impacted the lake's water quality were horses and animals getting washed in there, soil movement from local earthmovers and people dropping their fish bowl waste into the lake. 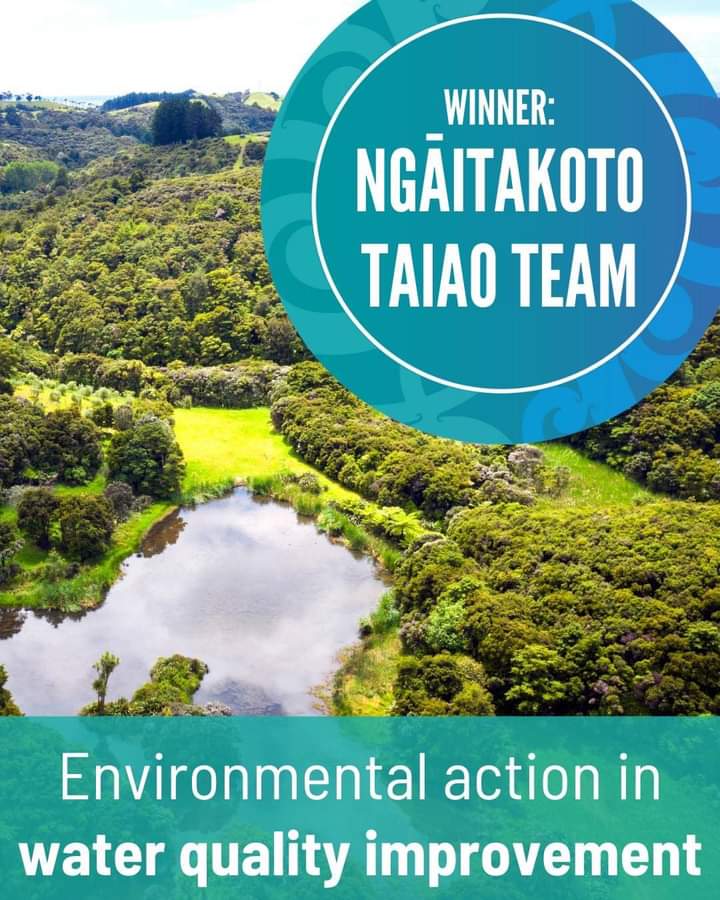 Their work includes riparian planting, water quality and testing, weed control, as well as landscaping and they have partnered with organisations such as Northland Regional Council and the Department of Conservation. They have done extensive restoration work around Lake Ngātu and have planted thousands of native trees in an attempt to "restore the mauri" of the area.

"My main goal is bringing back the wairua of the lake. The lakes wairua, our wairua, they are connected. Wairua is a feeling you get when you go down to the lake. Like today. There’s pūkeko down there, the water’s looking blue, the kuta’s healthy.” 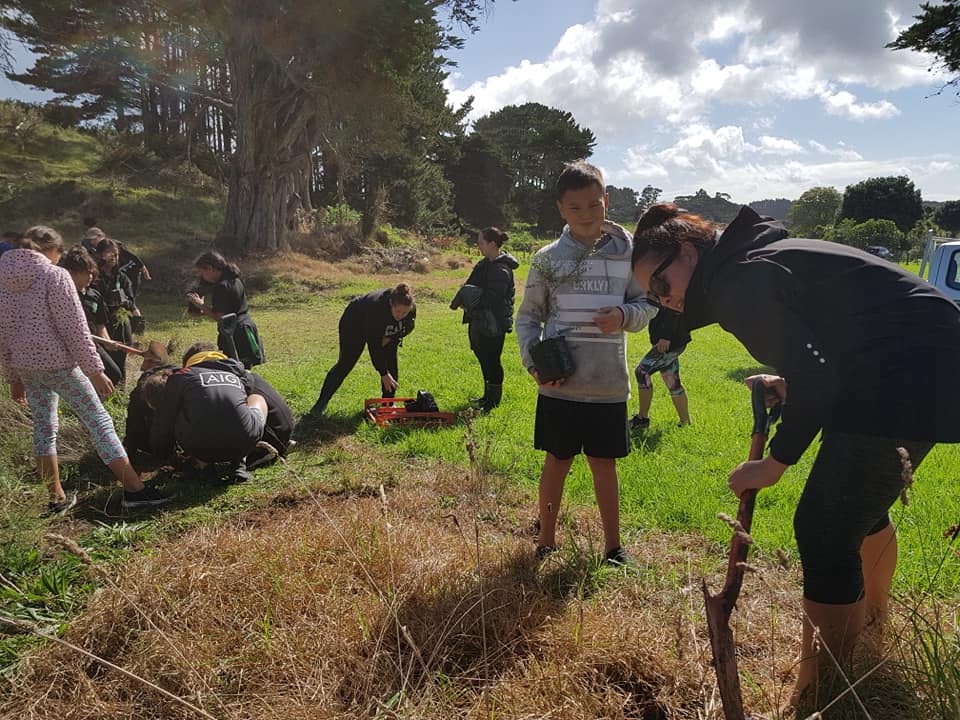 Hooper holds a bachelor’s degree in applied science with an environmental major and has worked for his iwi and the Department of Conservation for over ten years. He told National Geographic that scientific training is only one part of his appreciation of the lake;

“The Western side of things helps me understand the science behind these lakes. How to care for them on a scientific level. But my spiritual connection comes from the fact that every single day when I was a kid, I would go to the beach, get pipis, then come here and have a wash. This is my turangawaewae - this is where I stand, and this is where my whānau stand.” 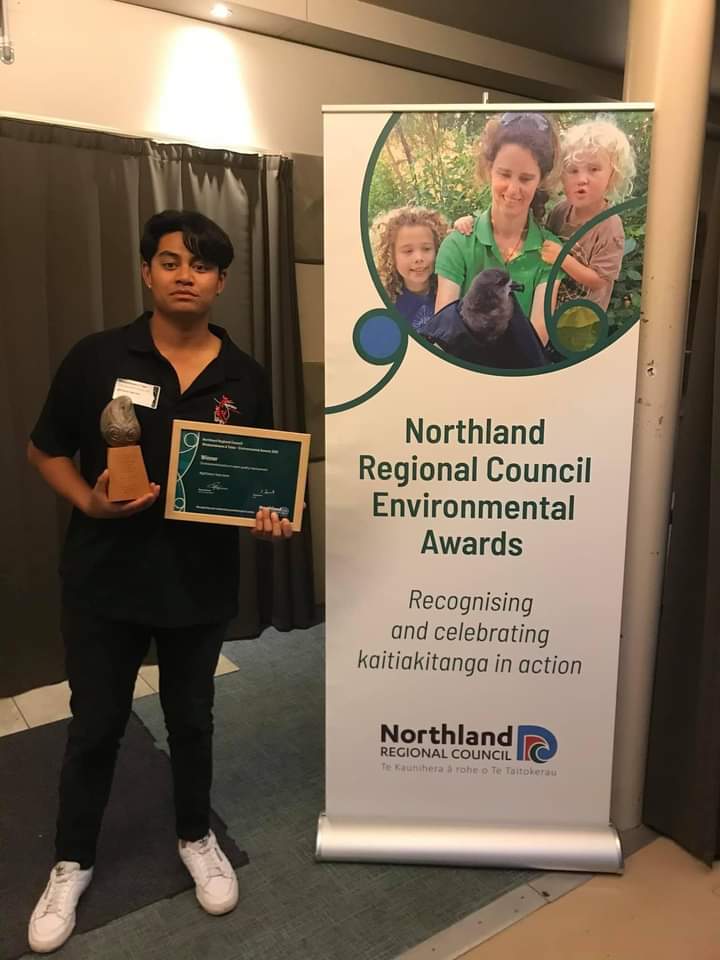 For Hooper, lake restoration can never be just ecological; it must be cultural, too;

“It’s not just about the lake. We’re rebuilding our people at the same time. Right now, I’m training some of our young people in how to build fences and do riparian planting. It’s all te ao Māori.” (National Geographic). 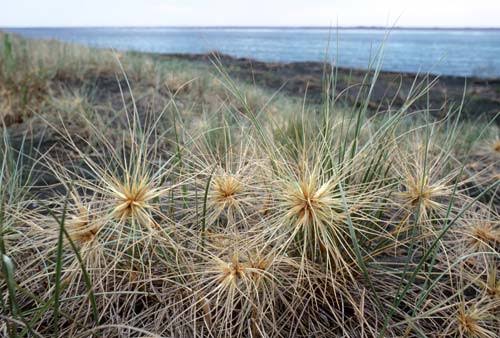 Betsy Young spoke to Te Hiku Radio about the life cycle and evolution process of important plants such as pīngao and spinifex. These plants are commonly found in the surrounding areas of Lake Ngātu to Te-Oneroa-a-Tōhē.

She discussed the role that these plants play for Māori in the natural world as well as the collecting and weaving process. Young also explained how to identify aspects like the colouring of the plant and how that relates to its well-being. She has been an avid contributor to Te Hiku Media over many years in discussing the benefits of growing plants, caring for the taiao, using maramataka and growing kai. Her knowledge kete helps the community care for the environment, stay connected, practice mātauranga Māori and understand life cycles to help us live in synchronicity with the natural world with the least amount of negative impact on the future. 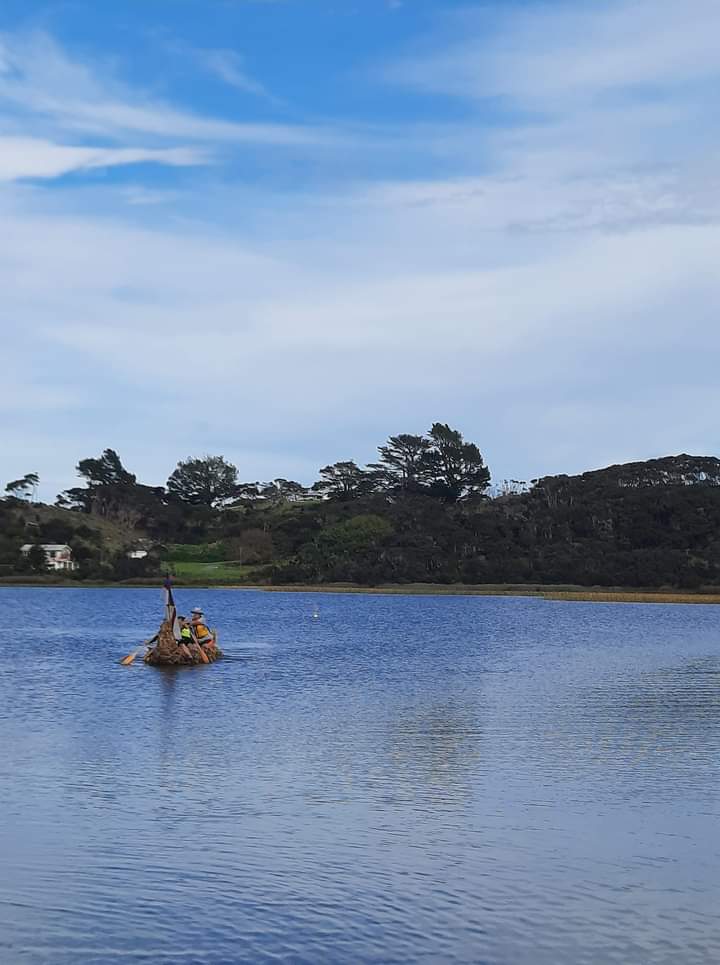 Recently Joanne Murray and local iwi, Te Rarawa, gathered raupō from Lake Ngātu to construct a waka in commemoration of Puanga and Matariki. It was launched successfully and rangatahi enjoyed paddling around Lake Ngātu.

The structure was strong and could carry around nine rangatahi. The event was wrapped with soothing waiata from Mere Wikitera-Simon and karakia by kaumātua Hone Basset. Local kōhanga and kura attended and it was a festive environment. It was an event that reflected traditional past-time practices when local elders used to create a family occasion out of gathering and weaving on the shores. 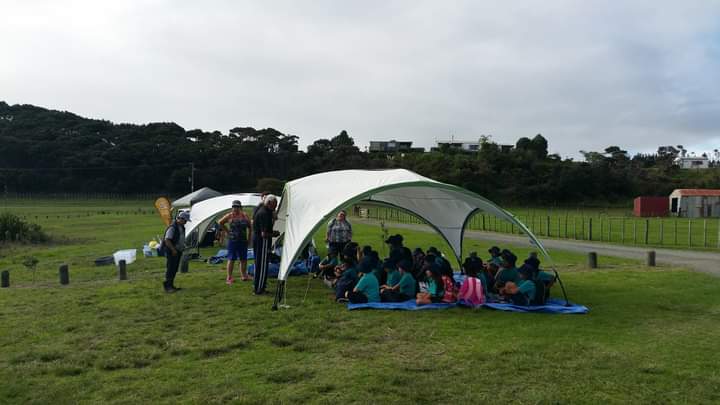 Lake Ngātu will continue to host local primary schools and provide positive gatherings all year-round that contribute to the biodiversity and well-being of this gem. World Wetland Day, Planting Days, Matariki and iwi kaitiakitanga will continue to restore this dune lake and improve water quality so that we can enjoy the resources that it provides for many generations to come. Rain has recently postponed the latest planting day for Ngāi Takoto, but they are set to hold one with Paparore Primary School once the school term commences.

Ngāi Takoto iwi continues to care for Lake Ngātu, it's biodiversity and surrounding dune lakes, to improve the quality of the water and, overall, add balance within its eco-system.

A whakataukī that helps Ngāi Takoto practice their kaitiaki responsibilities when working around Lake Ngātu is;

Moko Tepania has put his hand up for 2022 mayoral elections.
1 month

Te Taitokerau is mourning the loss of an influential leader who inspired the nation
4 weeks, 1 day