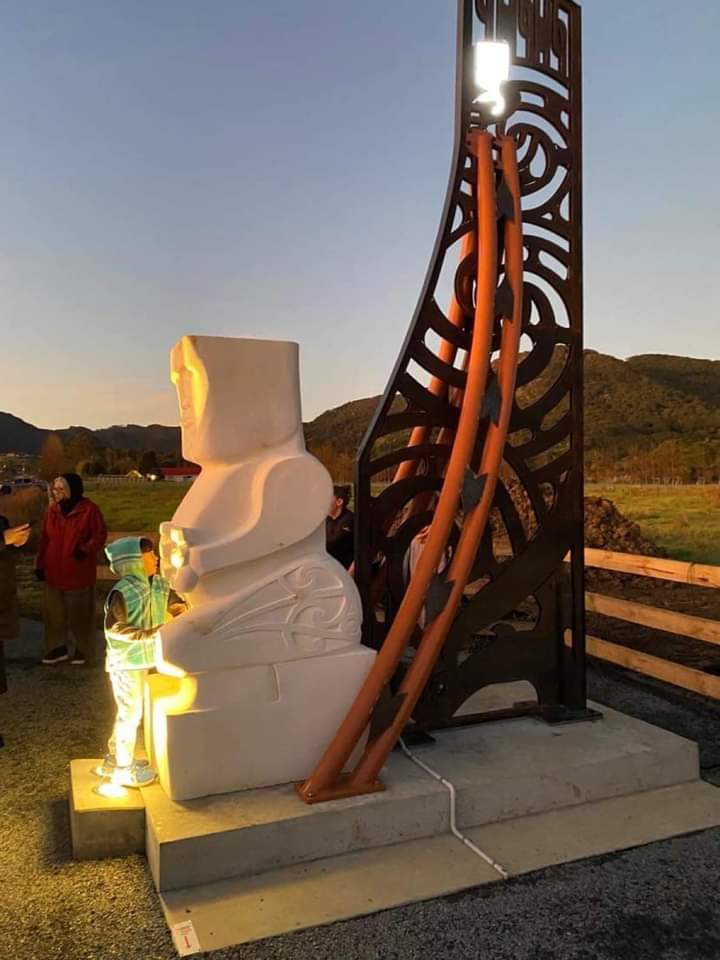 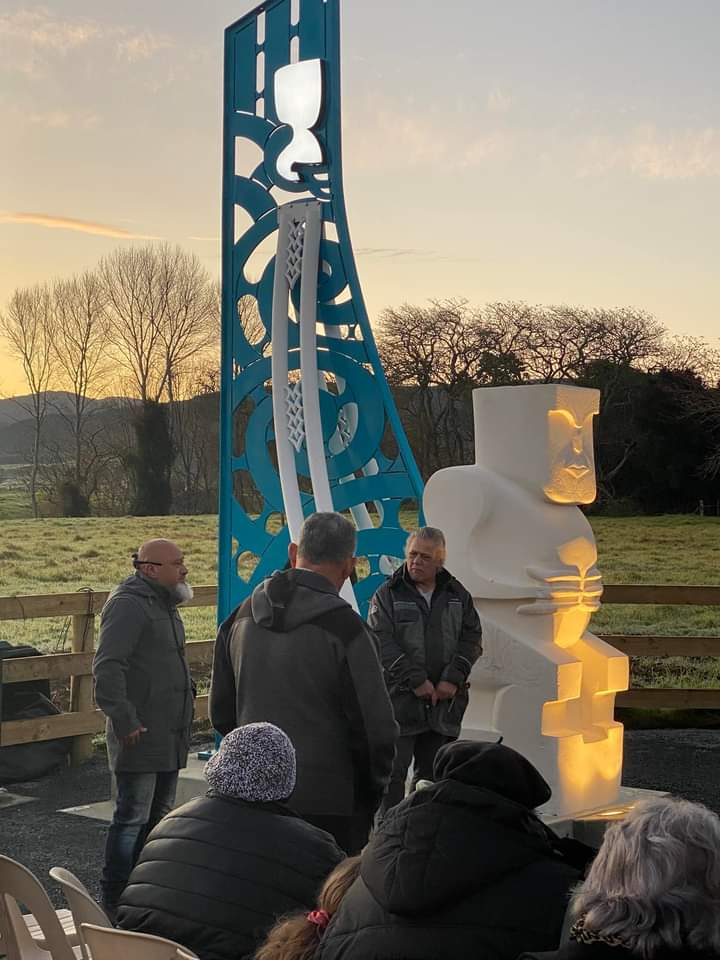 The new carvings have a combined weight of approximately 4 tonnes and the stone was sent up to Te Taitokerau from Ōamaru because the artists struggled to find a piece big enough to suit their design. Other materials used in the design are aluminium and corten steel for the taurapa. 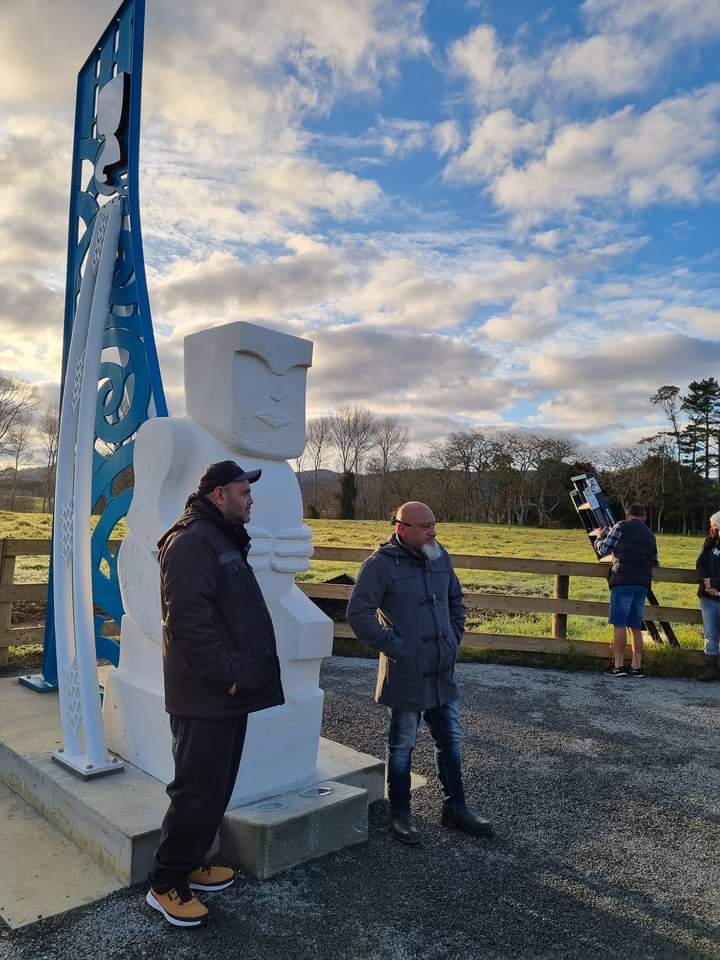 The artists also pushed their boundaries to find harmony in working from separate places on the carvings. Snowden is the artist behind the stone sculpture and Te Hauhau designed the aluminium sculpture. They explained that they needed to ensure that the final result balanced and complemented each others’ mahi once they brought it together. Snowden felt they had achieved that goal and hoped they served to inspire the next generation of rangatahi to aim even higher.

"Like our tūpuna, our design strives for the betterment of our people and to take art to another level." 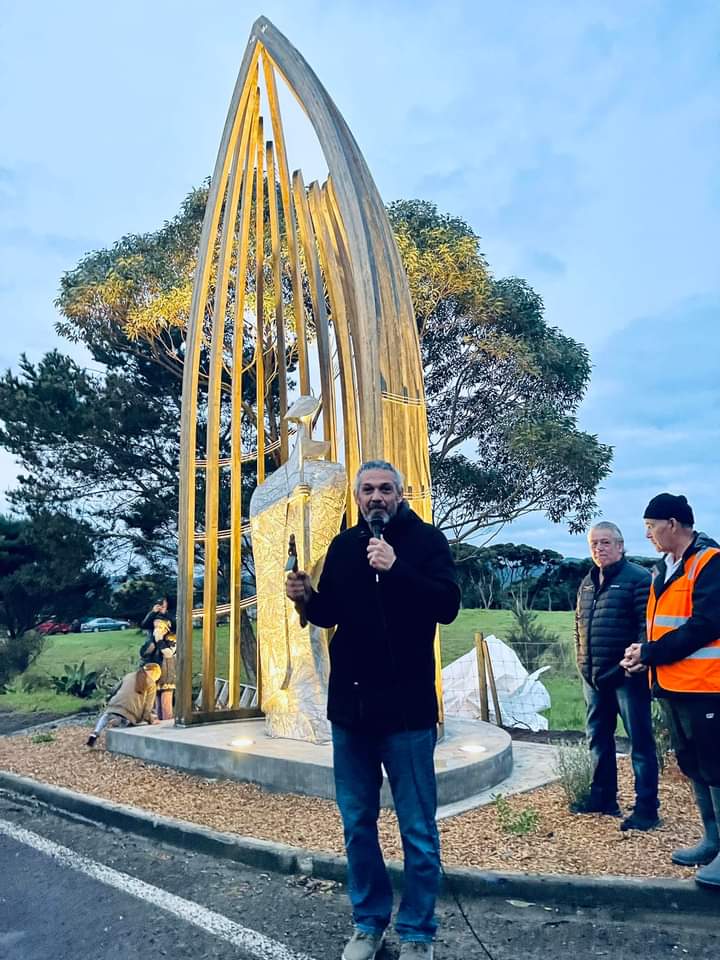 Tūmoana and Pōroa link to the recently unveiled gateway at the main entrance of Ahipara, which represents Pātito, a direct descendent of Tūmoana.

Pātito was the son of Haupure who married Paengatai. Pātito and his father were involved in the battle for Ahipara. Pātito was the great-grandson of Tūmoana who was responsible for establishing authority over whenua from Hokianga around to Ahiparapara.

Tūmoana was captain of the Tinana canoe and was a significant tupuna that Haami Piripi compared the late Sir Hekenukumai Pūhipi to as a pioneer of waka building and craftsmanship.

"The Ngāti Kahu and Te Rarawa elder [Sir Hekenukumai Puhipi] backed himself to the extent of building a waka and following the path of his ancestor Tūmoana 100 years ago to sail back to Hawaiki" said Piripi.

Pōroa was described by Hone Paitai as one of the most well-known kaitiaki full of mana when sharing history during the Matariki hīkoi up maunga Whangatauatia.

"Everyone knew back then, to only take what you needed. Anyone who chose otherwise would be taken to execution rock by Pōroa, at the foot on this maunga. The moana was highly regulated. Today, you have councillors helping people who get caught taking twice the limit, not once, not twice, three times or four times" said Paitai. 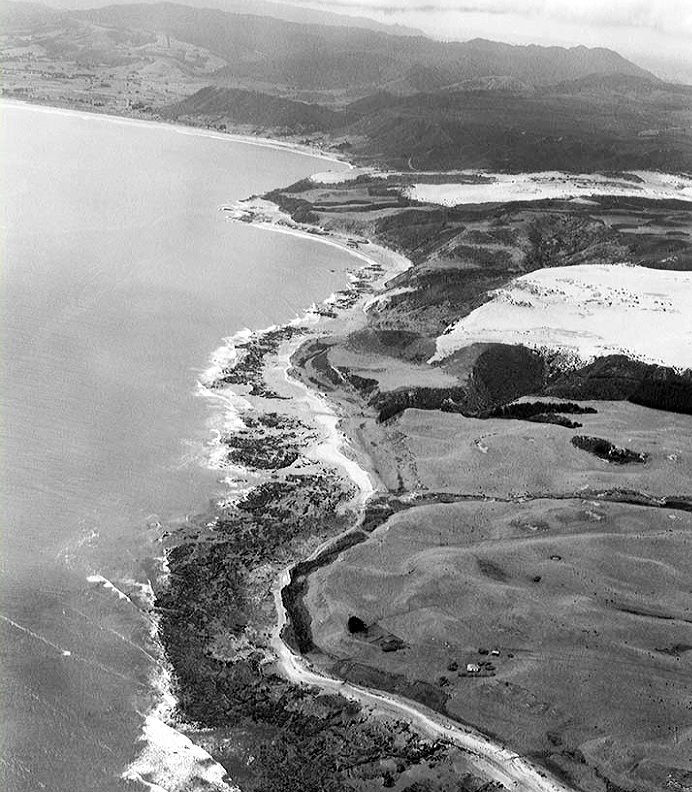 Pātito had a son, Toakai, and it is through these chiefly lineages and narratives, plus those of Pōroa, that significant events of Te Rarawa and Ahipara are documented.

The cultural gateways in Ahipara represent foundational tūpuna for whānau, hapū and iwi. 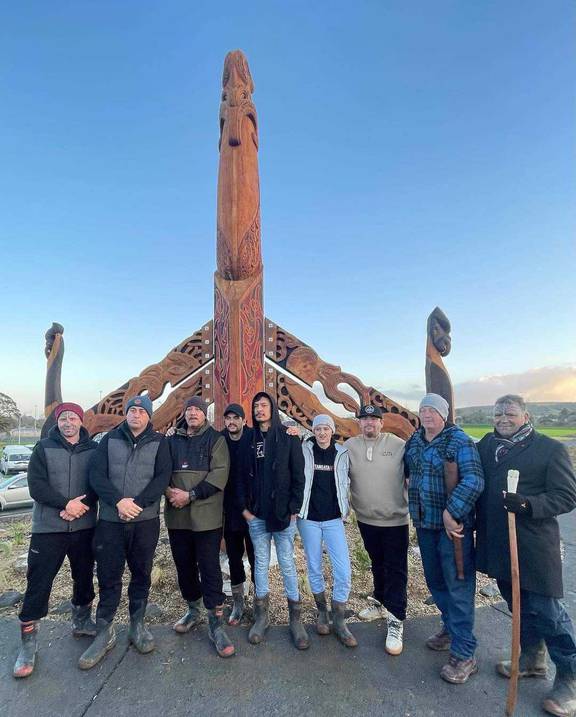 Other recent community gateway projects include a grouping of tumu on South Road, Kaitāia, named 'Orongo' which was held on Friday, July 29 2022. The tumu are located within Te Rarawa and Ngāti Kahu rohe. The tumu was a collaborative effort between nine local carvers. Six were from Te Rarawa and three were from Ngāti Kahu. The team worked for more than 1500 hours to create the piece from a workshop in Parapara which cost $100k. The name represents peace, after Rongo, the atua of peace and unity. The name 'Orongotea' was also the historical name for Kaitāia.

The Awanui township (Ngāi Takoto) is undergoing a makeover with new gateway pou yet to be unveiled. The pump tracks in Kaitāia and Ahipara are a hit for rangatahi and several magnificent wharf upgrades for the region, such as Pukenui and Unahi, are also the result of collaborative community efforts led by the Te Hiku Revitalisation Project. 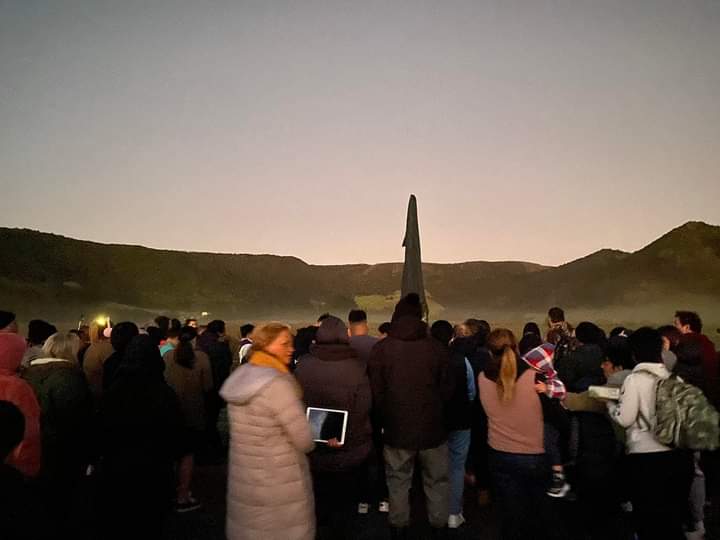 The unveiling of pou, carvings, tumu, tomokanga and taonga in the morning follows tikanga Māori in which new life is bestowed upon a new day. It marks a new beginning and is believed to bring good fortune and a positive new pathway forward for the people, as opposed to unveiling taonga at dusk.

Many have been braving the cold to unveil the new cultural gateways, which reflect a combination of modern collaboration and traditional Māori practice. 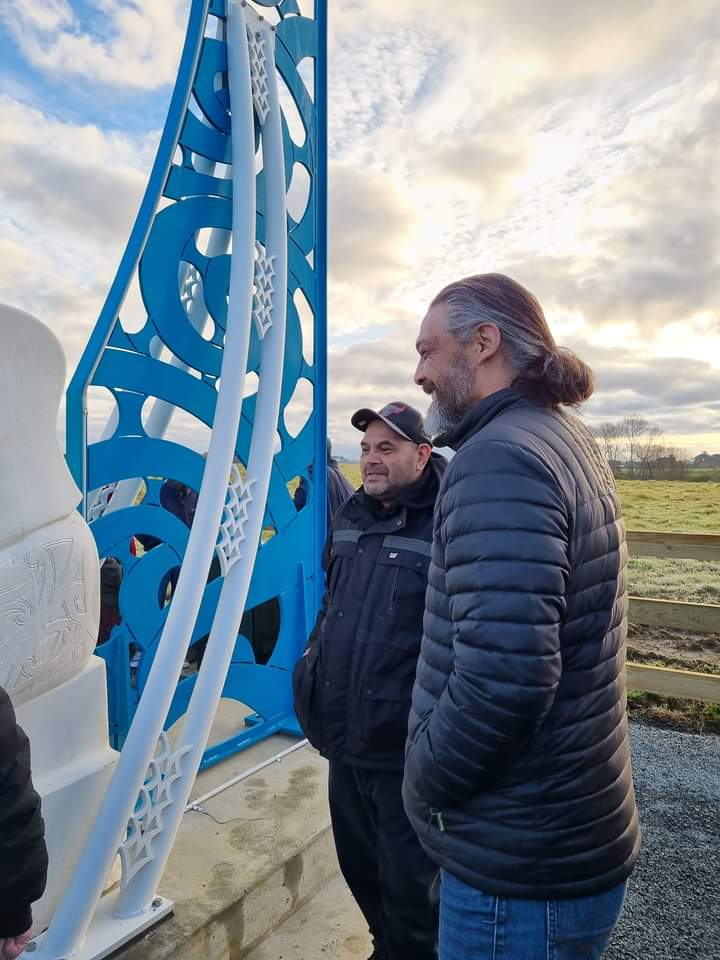 Snowden said it was a privilege to create an artwork in honour of his ancestors and for future generations to come.

Ngāi Takoto accepted the dental duo's offer to provide a free clinic and are back for a second time
5 months, 3 weeks

Accessibility barriers to kai are still an issue face by our community. We explore kai sovereignty options
5 months, 1 week