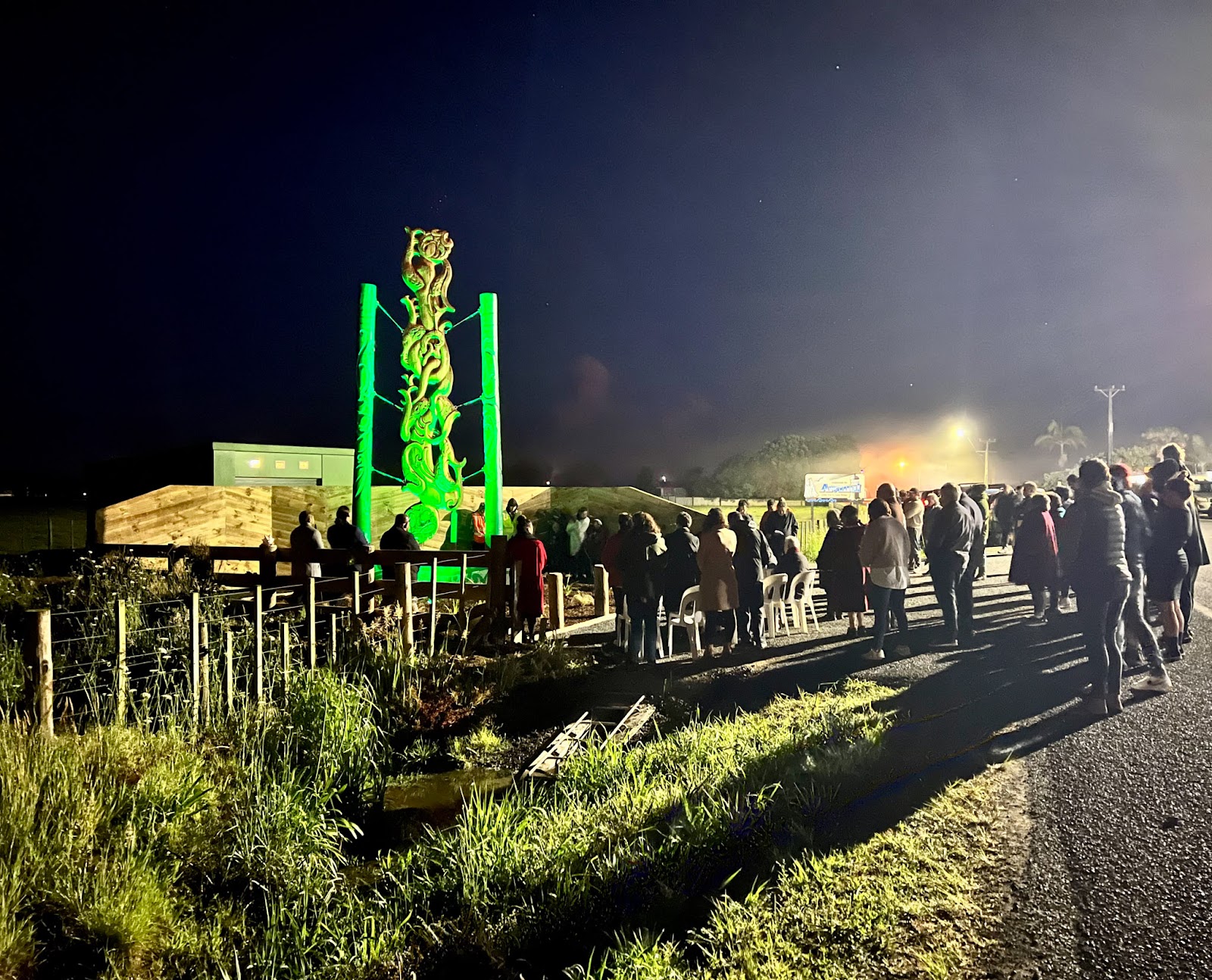 A beautiful rising mist set the scene for the tomokanga unveiled at 5.30am on the morning of Saturday the 5th of November 2022. The tomokanga was carved by the talented artist, Māori Ertsich of Ngāi Takoto. OTO Construction's Tohe Kleskovich assisted with the fencing, footing and support structure whilst Kinetic Electrical helped with the lighting. The unveiling also timed for the start of the annual event, Awanui Day.

Archdeacon Malcolm Kaio Karipa blessed the morning with the tautoko of Ngāi Takoto iwi also present. He also blessed the new car park opposite the Awanui River and Bakerman Cafe.

The tomokanga is one of three that will create an entrance into the Awanui township and represent two pā sites, Whare Kākāriki and Tūtūtarakihi. Whare Kākāriki tells the story of a green lizard that once resided at Wharekākāriki pā, the pā of Tikiahi. The kauri was sourced from Te Make, the location of Tikiahi's māra. 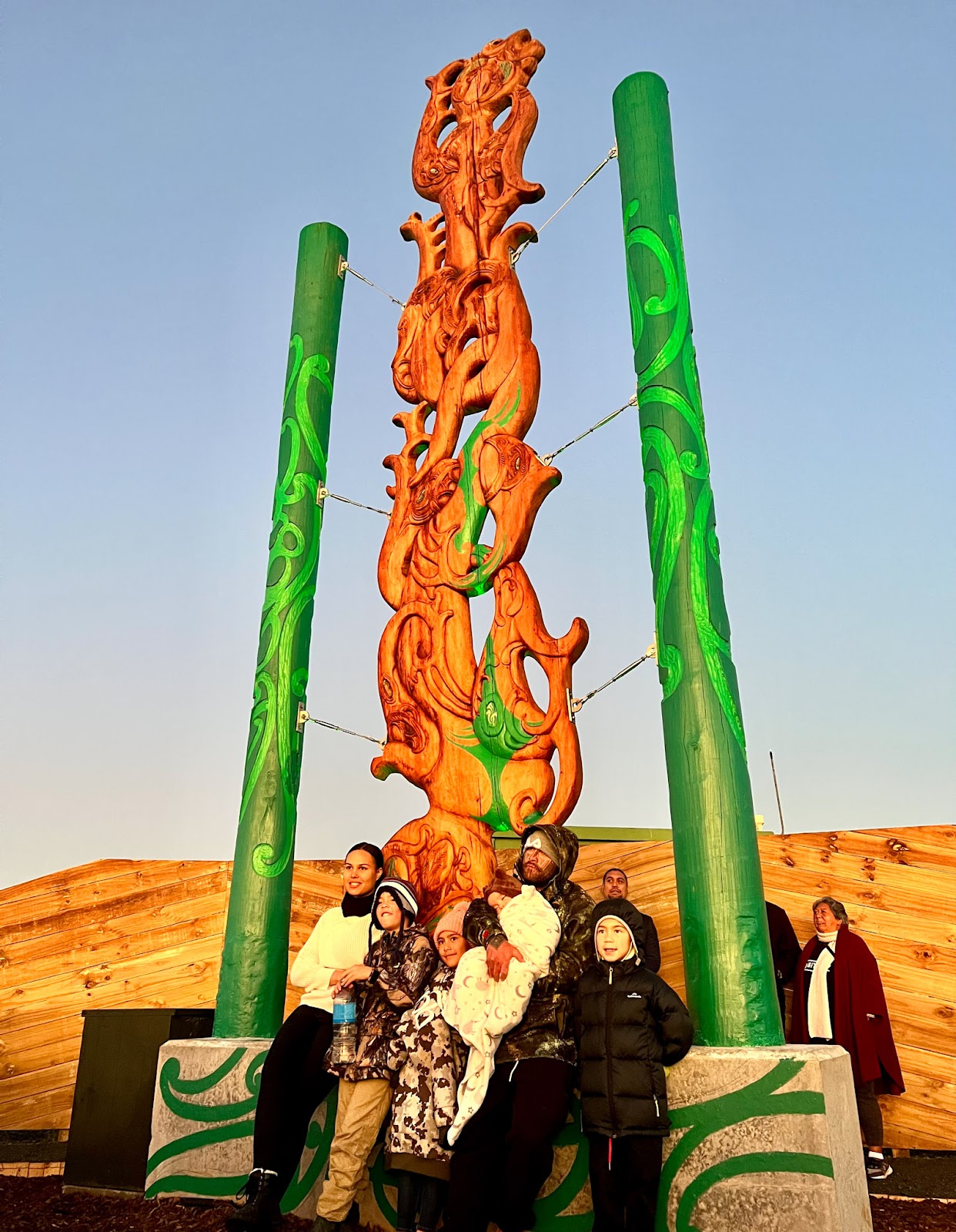 Wharekākāriki was the pā that Tikiahi lived at and where he watched over his domain. He was an esteemed tupuna of Ngāi Takoto. Tikiahi’s tupuna, Tamahui, lived on Tūtūtarakihi Pā which is located across from the Kaitāia Airport.

These pā formed a strategic line from the Rangaunu Harbour to Kaitāia (Kerekere Pā). They were two of several defensive pā within this rohe. They are located on the northern side of Quarry Road and east of the Whangatane Spillway and provided an extensive view over to Te Make where Tikiahi had his gardens and food storage. 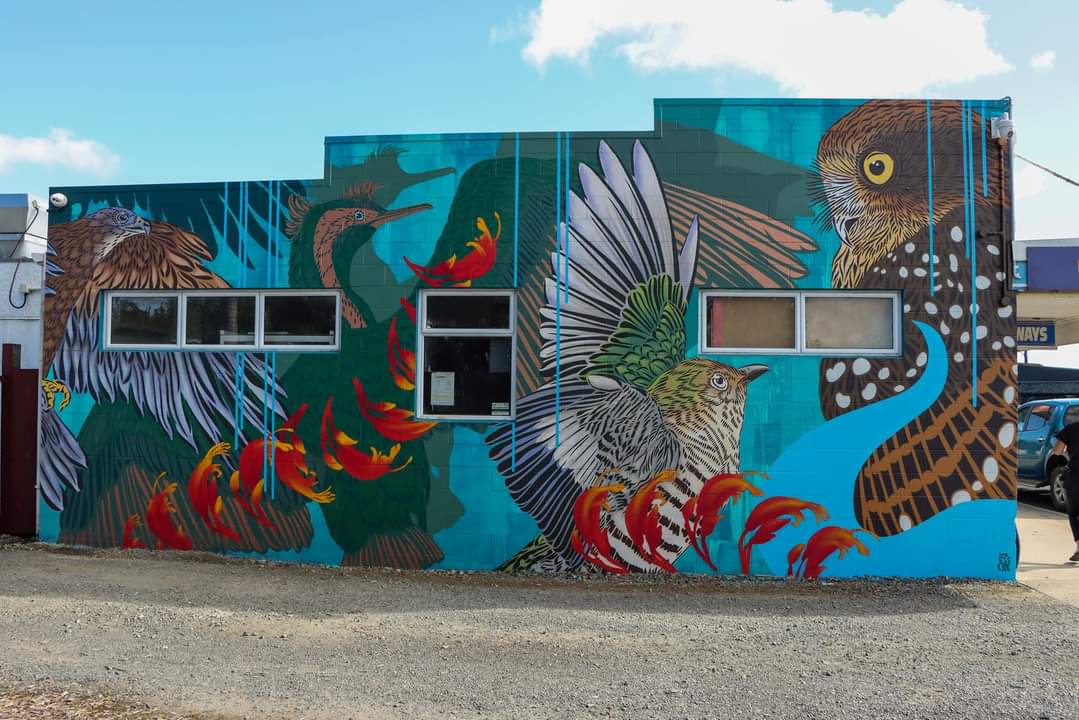 The project is part of the Te Hiku Open Spaces Revitalisation Project which has produced amazing facilities right across Te Hiku o Te Ika. Some of these new spaces include: 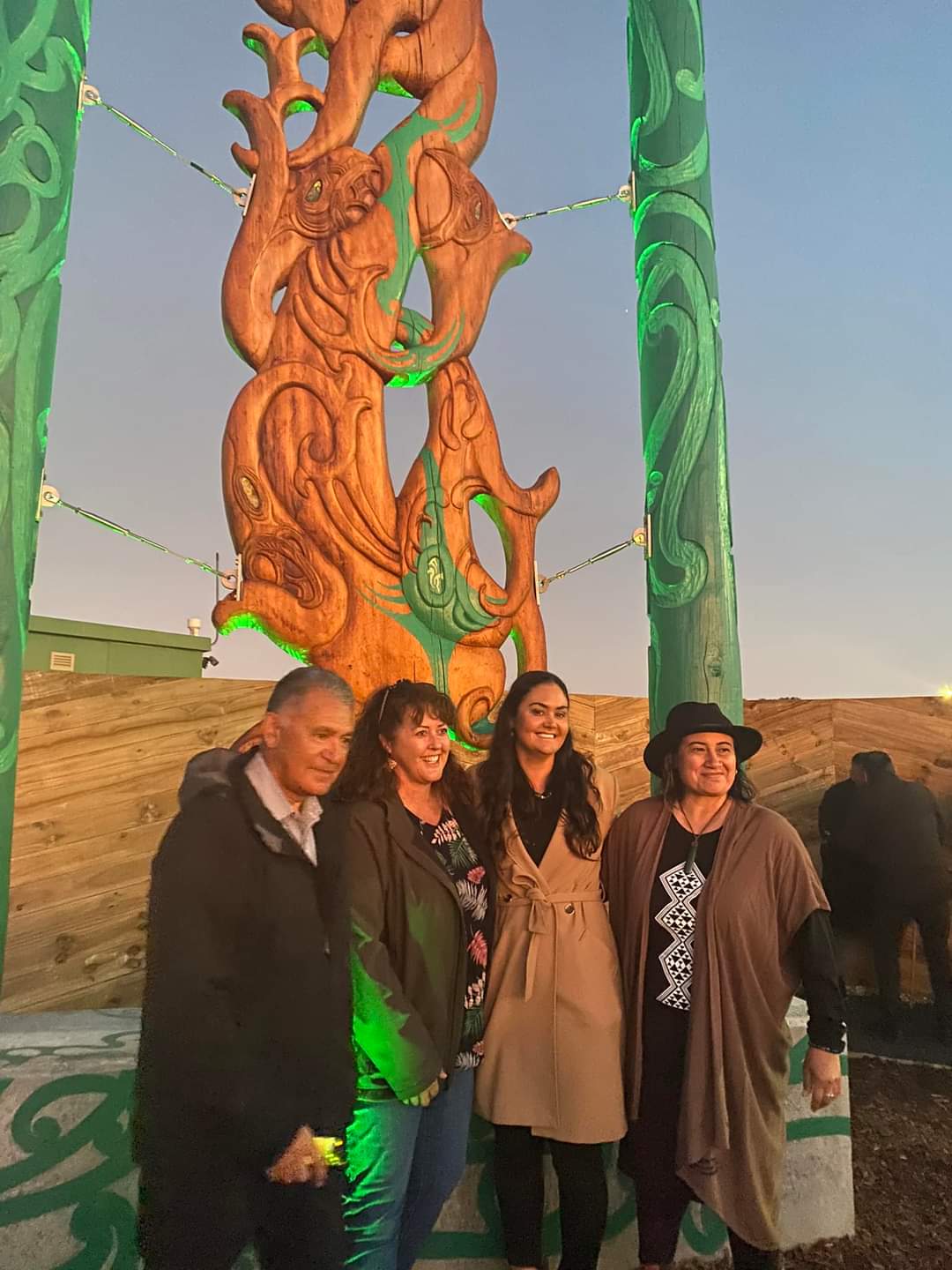 Many of the projects have been completed and unveiled with only a handful left to go, such as the Awanui Pump Track. Andrea Panther spoke to Te Hiku Radio about the project;

"The community are really excited to see these projects come to life. It has been a really interesting collaborative exercise but really fun too. Like in Ahipara for example, we went into every classroom at Ahipara School and the students told us what they wanted and we showed them their options." 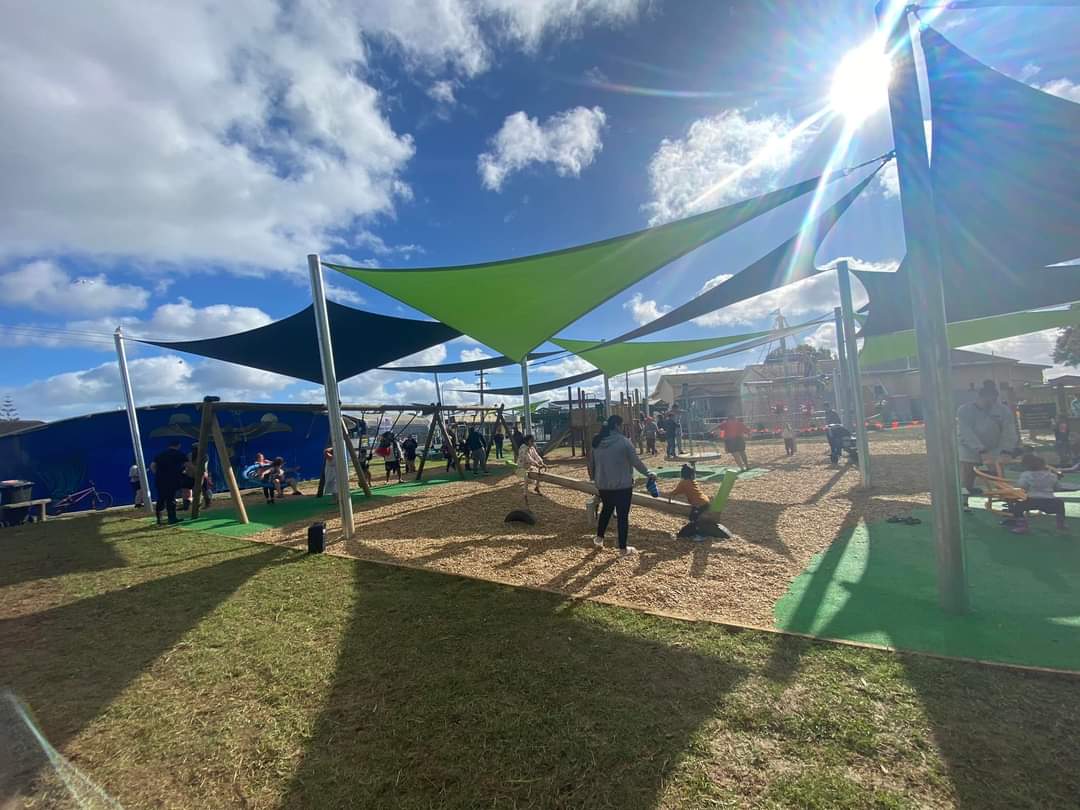 The Kānoa segment of the Provincial Growth Fund has helped bring the Te Hiku Masterplan to life. Many key people have driven this project to this stage such as Councillor Felicity Foy, Shane Jones, the Te Hiku Community Board and the respective iwi within the rohe that each project exists. The Te Hiku Open Spaces Revitalisation Project has shown collaborative success and has also gained international recognition. Other countries want to adopt their community collaboration strategies into their own council bodies. 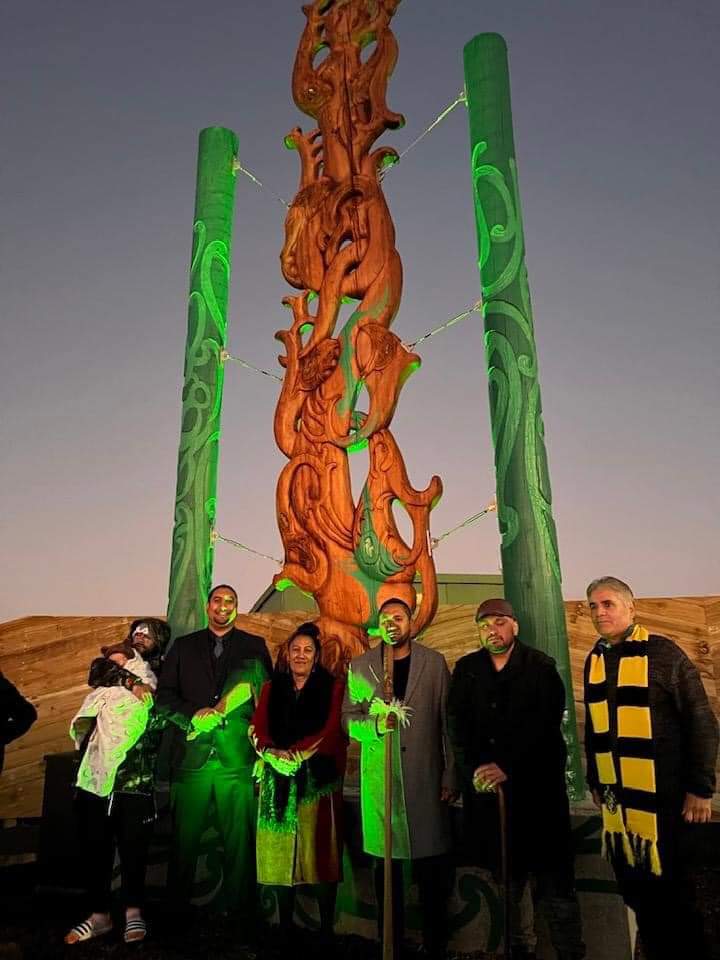 “is an exemplar of how modern local government acts as a leader and broker of solutions that promote community wellbeing and achieves tangible results. This pragmatic and focused wellbeing initiative is exactly the outcome that Parliament had in mind when it restored wellbeing to the statutory purpose of local government.” 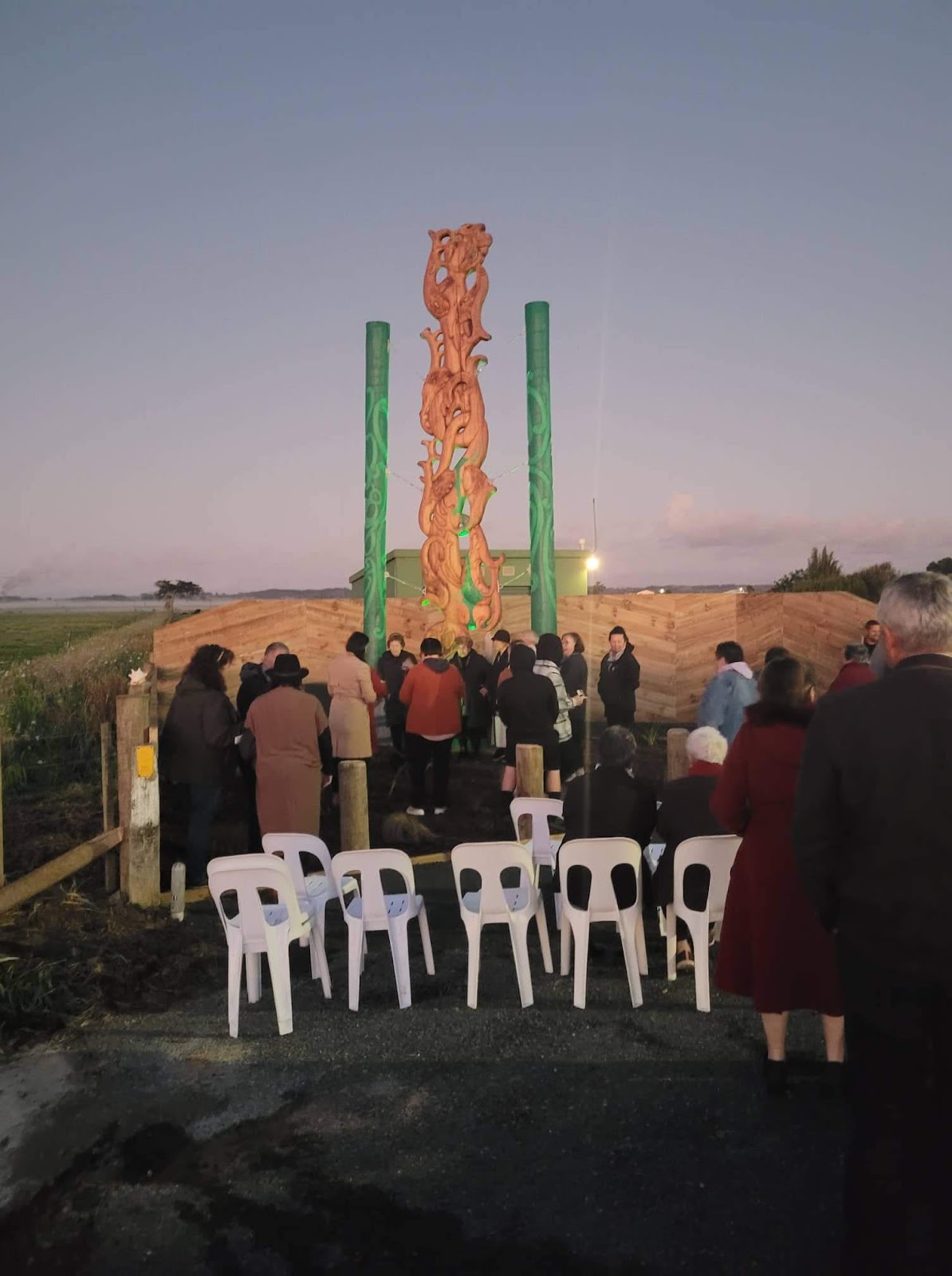 Erstich is the mokopuna of two well known Awanui community members, George and Angel Erstich. George was the son of Kataraina Matenga and Ante Erstich. Kataraina was the daughter of Herepete Matenga and Irihapeti Awarau. Māori's father, the late Pou Erstich, was a key figure in the revitalisation of te reo Māori, Te Kawariki movement and key iwi kaupapa for Ngāi Takoto. Māori is a direct descendent of the tūpuna who lived on Wharekākāriki and Tūtūtarakihi Pā.

He has contributed his talents to other areas of the Awanui township such as his stunning manu mahi. He designed the mahi around the Ngāi Takoto whakataukī on the state highway 10 entrance and the iwi symbol of the pioke shark worked into metal on the brand new garden boxes.

Suzie Clark of the Te Hiku Open Spaces Revitalisation Project expressed her gratitude toward Māori for his efforts;

Ngā Kākāriki was unveiled this morning and what an awesome way to start the day.

The heart of the pioke, Awanui township, is bursting into life as a result of the hard work by those involved. The local community and visitors can learn about local history whilst enjoying new facilities such as the new playground, new car park, soon-to-be pump track and beautiful artwork.