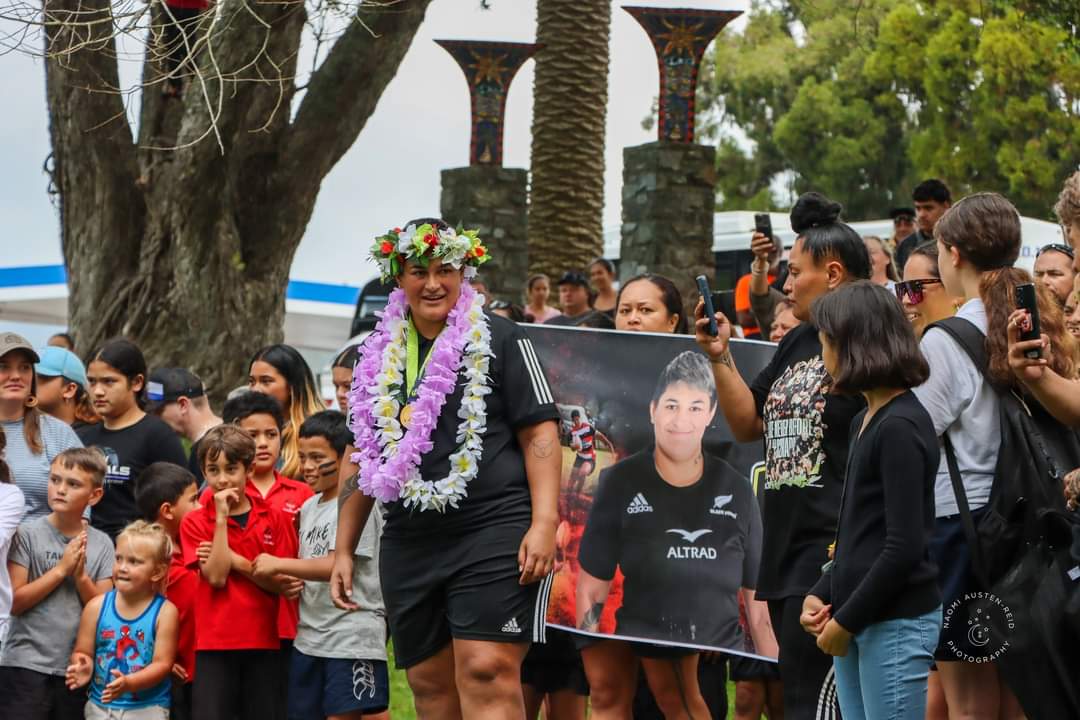 The town rallied together to hold the event after Saturday’s win. It was organised by Murray’s whānau, her home club, Te Rarawa Rugby Club, and wrapped with the support of local businesses.

Leslie Wallace of Te Rarawa Rugby Club said that it's because that's how the small town is. Everyone knows everyone. We can close down the street and have a police escort. It's the Kaitāia spirit.

Cheryl Murray, a whanaunga to Krystal, wrote a heartfelt tribute on social media;

"The path she has paved to inspire us all, you don't need to move away from home, you don't need the flash facilities - you just need to work hard, be determined and be passionate. Hard work beats talent if talent don't work hard. But when you're talented AND work hard, this is what you get." 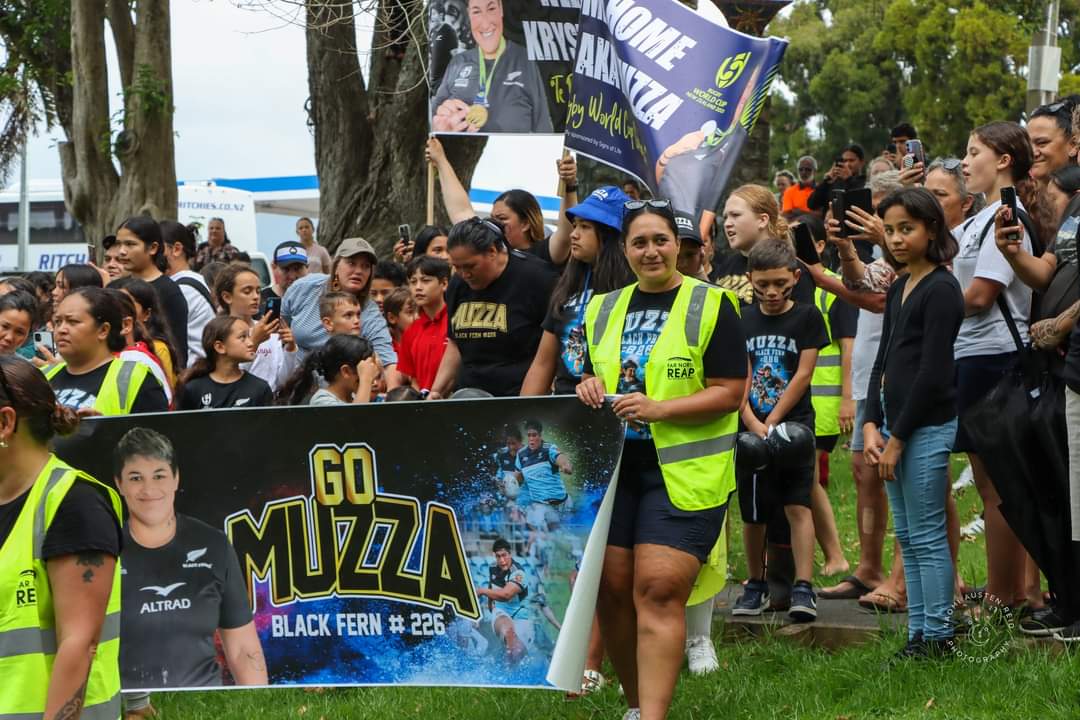 The township of Kaitāia gave the 29-year-old a hero's welcome, which began at Kaitaia Plumbing and finished off at Jaycee Park. Despite the NZRU not putting on a celebration for the Black Ferns as a whole, and Kaitāia being only one of a handful that put on celebrations for their champions, the small rural town managed to put their tight-knit community spirit on display in hundreds. 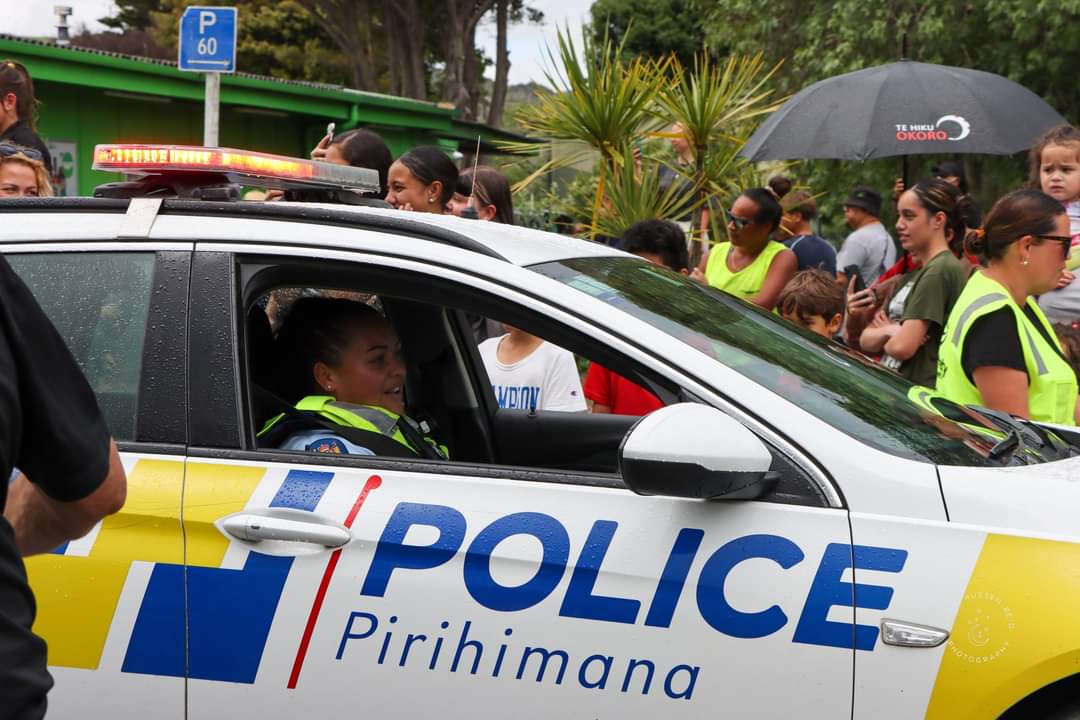 Murray sat on the back of a truck and was carried through the main street like royalty. Her hometown brought her to tears as they acknowledged their latest world champion. 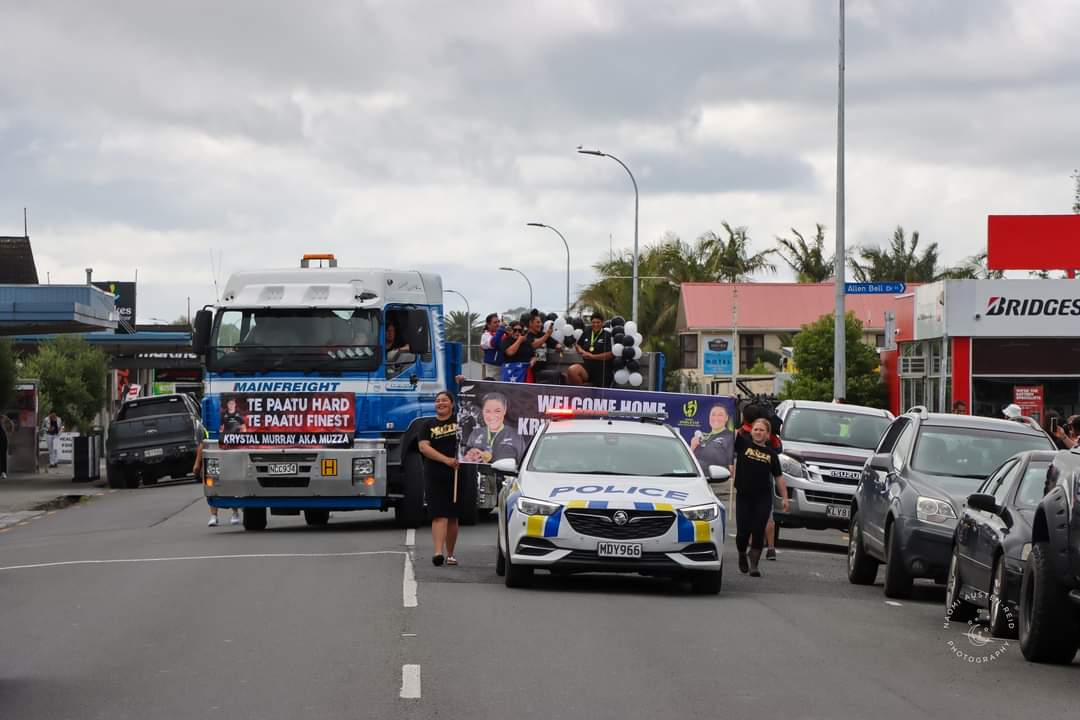 The humble sports enthusiast is talented in multiple codes, having also played top-tier league for the Kiwi Ferns from 2014 - 2017 before making the switch to rugby. Murray spoke to Te Hiku Radio about how the transition was for her;

"It was quite hard because league isn't as technical and tactical as rugby. But there are positives too, like how I can bring over running lines from league to rugby."

Te Hiku Radio then asked Murray how she prepped as an individual, and as a team in the lead-up to the RWC Final; 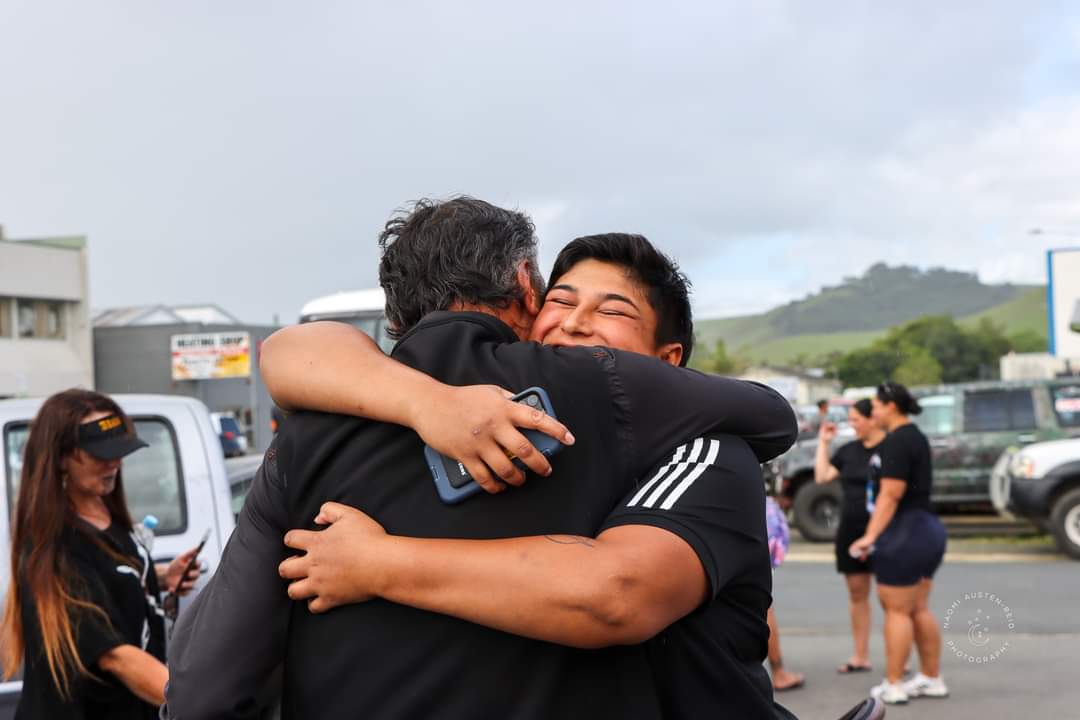 The nail-biting second half of the RWC Grand Final saw the Black Ferns beat England at Eden Park with a final score of 34 - 31. The country was sent into a frenzy as Murray crashed over the line in the corner of the field, putting a fierce display of grit into the way she held onto the ball in the dying seconds of the game.

She has an impressive timeline of achievements as the result of her pure dedication, soulful grassroots approach, humble whānau support, grounded, determined and committment to improving sporting pathways for rangatahi within Te Hiku o Te Ika. She has given nothing short of greatness in every code she has participated in. 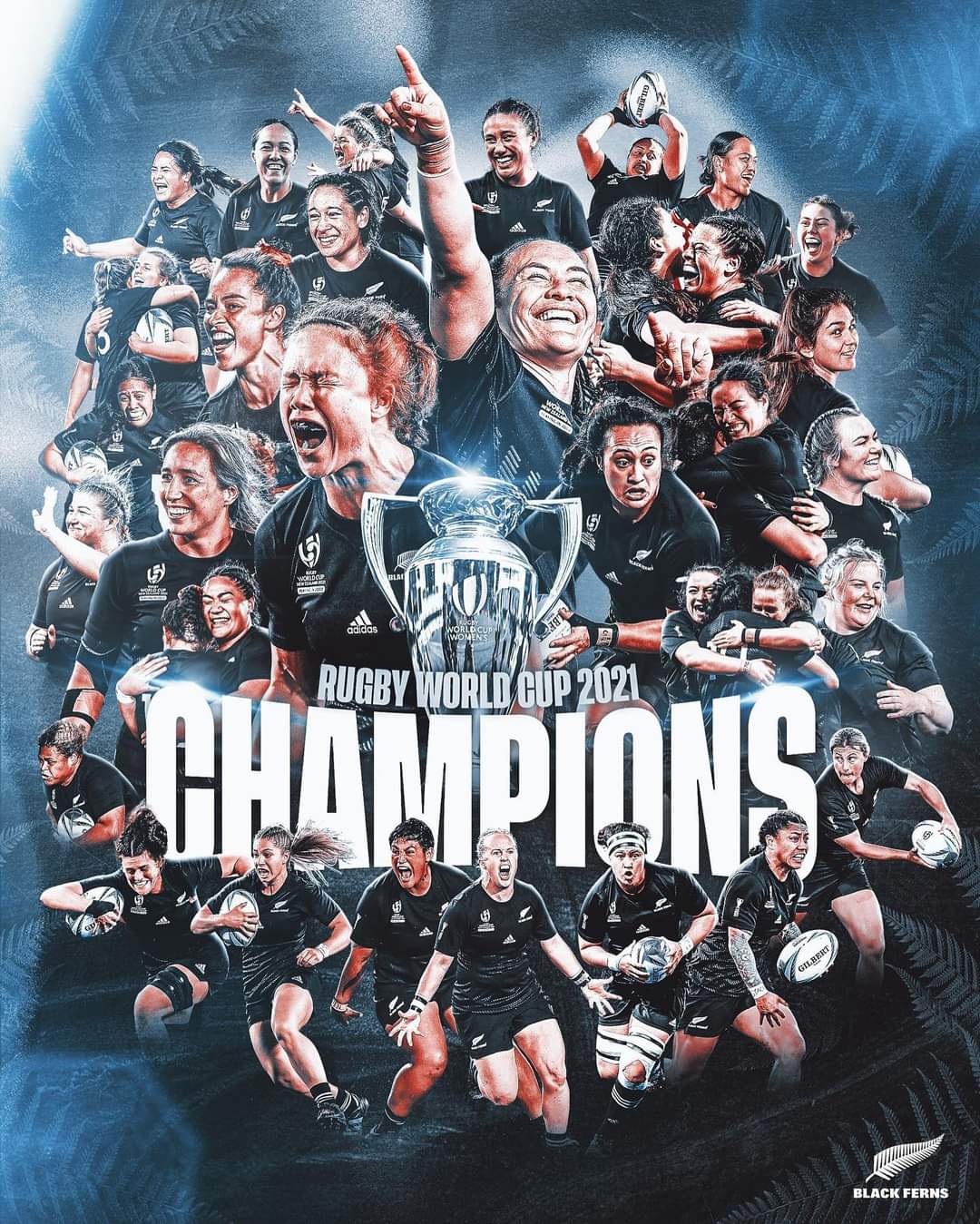 Murray hopes to have inspired the next generation and urged her community to continue to help nurture the rangatahi.

"It's going to be one of these young ones in front of us later. What are we doing to make sure it happens? To our rangatahi, don't forget who you's are when you go through life. I want you to remember where you're from, and make it known where you're from and don't ever lose yourself in the minds of the world." 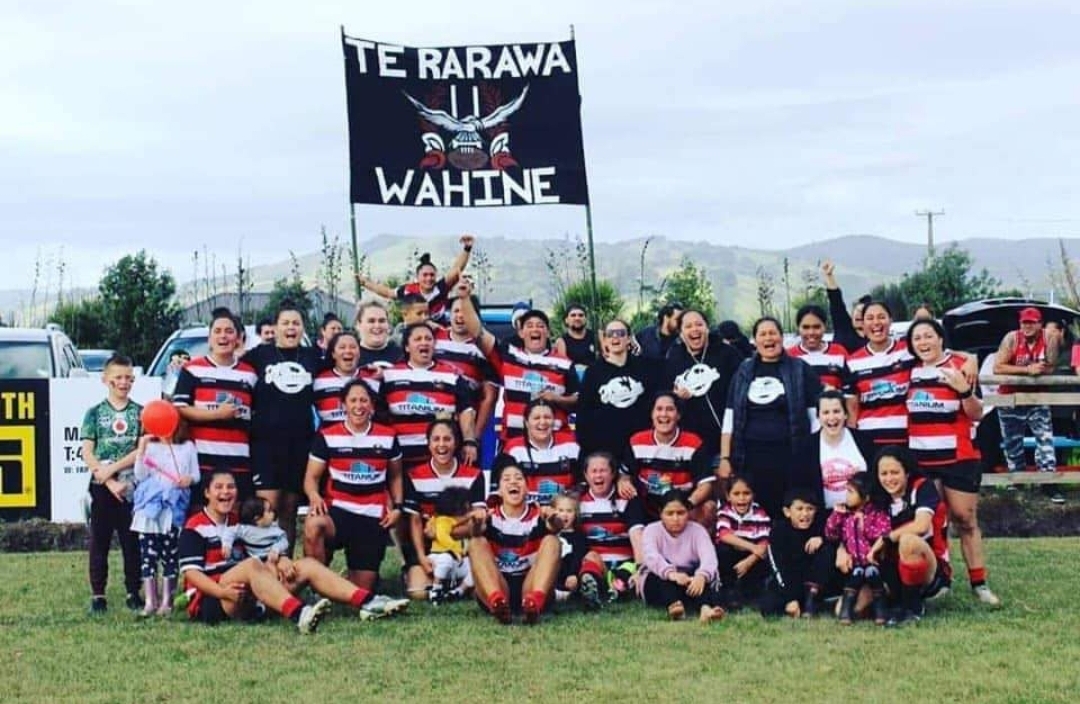 Murray is a driving force behind creating better pathways to representative rugby for wāhine in Te Hiku o Te Ika.  It is within her club that her whānau ties and motivation lie. She is determined to stay within Kaitāia and bring the resources to her and her community, to rise together and provide an environment that can nurture local talent without them having to move away. 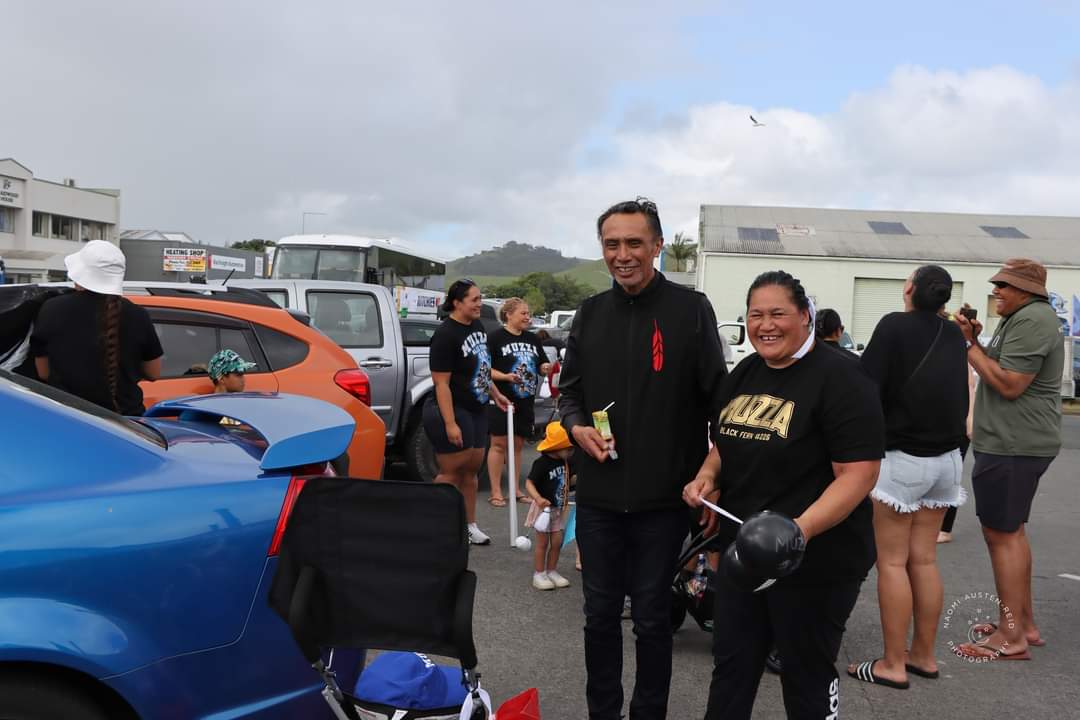 Her support team have been right by her side, her whānau and her club. Yesterday afternoon's parade showed her that her community were right behind her too - drizzled in pride. 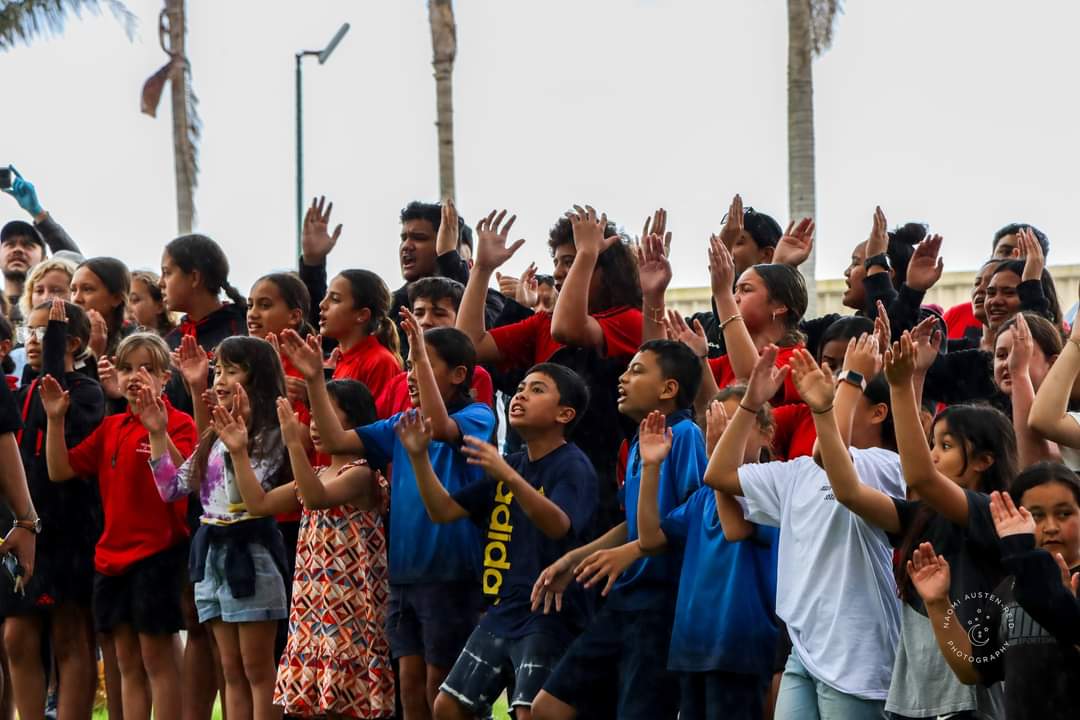 She has proven to her hometown that, not only can local wāhine play rugby without having to leave their town, but you can also make the Northland Kauri women's team. She outdid herself, by making the Black Ferns and capping that with a championship.

"It's been a dream of mine to play for the Black Ferns at the World Cup, so I set out a couple of years ago to play in the World Cup in Whangārei on my own whenua in front of my own people," said Murray.

Built in 1876, Rāwene Church has been restored to provide a creative space for artists
2 weeks, 4 days