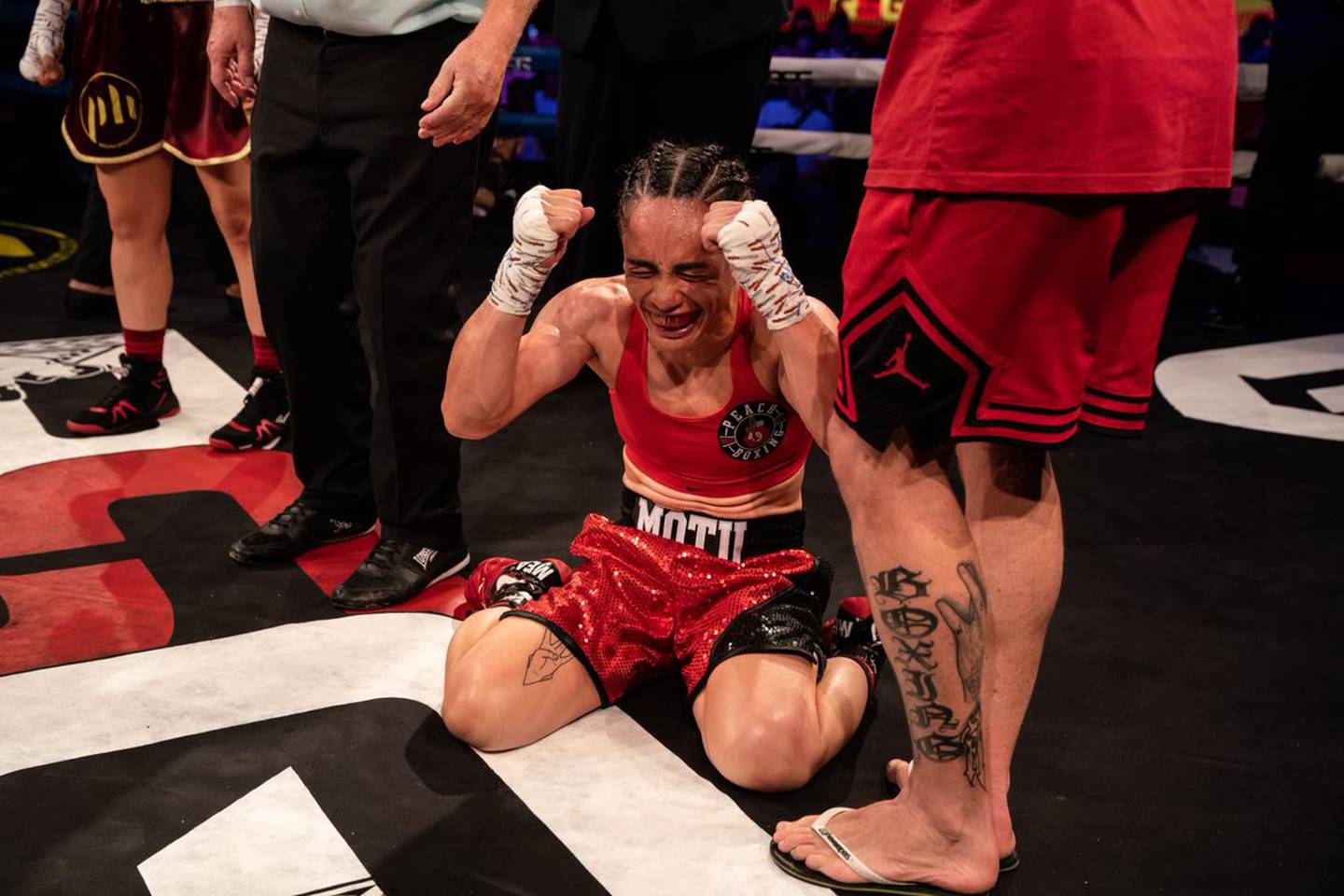 Mea Motu, a professional Māori boxer of Pukepoto, Kaitāia, has claimed her first international boxing title. She has taken out the WBC Asia Super bantamweight title in Dubai.

Motu claimed the title after overcoming Iran’s Nastaran Fathi via a split decision at the Hilton Palm Jumeirah last week.

Motu cemented a final scorecard of 77-75, 77-76 and one judge scored the contest 77-75 for Fathi. The win took Motu’s record to 15-0, 6 KO, as she handed the previously undefeated Fathi the first loss of her career.

Both fighters gave everything they had, knowing that a title and a World Boxing Championship world ranking were on the line. The anxious eight-round encounter won the Fight of the Night award.

The 32-year-old is known for her explosive aggression despite an early head clash leaving swelling over her eye. Fathi, to her credit, maintained her composure in the face of Motu’s constant pressure but continually came off second best throughout the exchanges.

The mother-of-five was emotional following the win, thanking her trainer, Isaac Peach, and her team in her post-fight interview.

“I have had a hard life, and my coach and his wife saved me. I am just so grateful for all the people bringing me here,” she said.

“I want to say a big thank you to Mum and the biggest thank you to Alina [Peach]; she is back home, and it was really hard to be here without her. She has worked so hard for me, and I love her and my family back home in Pukepoto. My kids are my strength.’’

She explained that this was her toughest fight to date as it was outside in the sweltering sun and the fight was in front of her opponent’s hometown crowd. 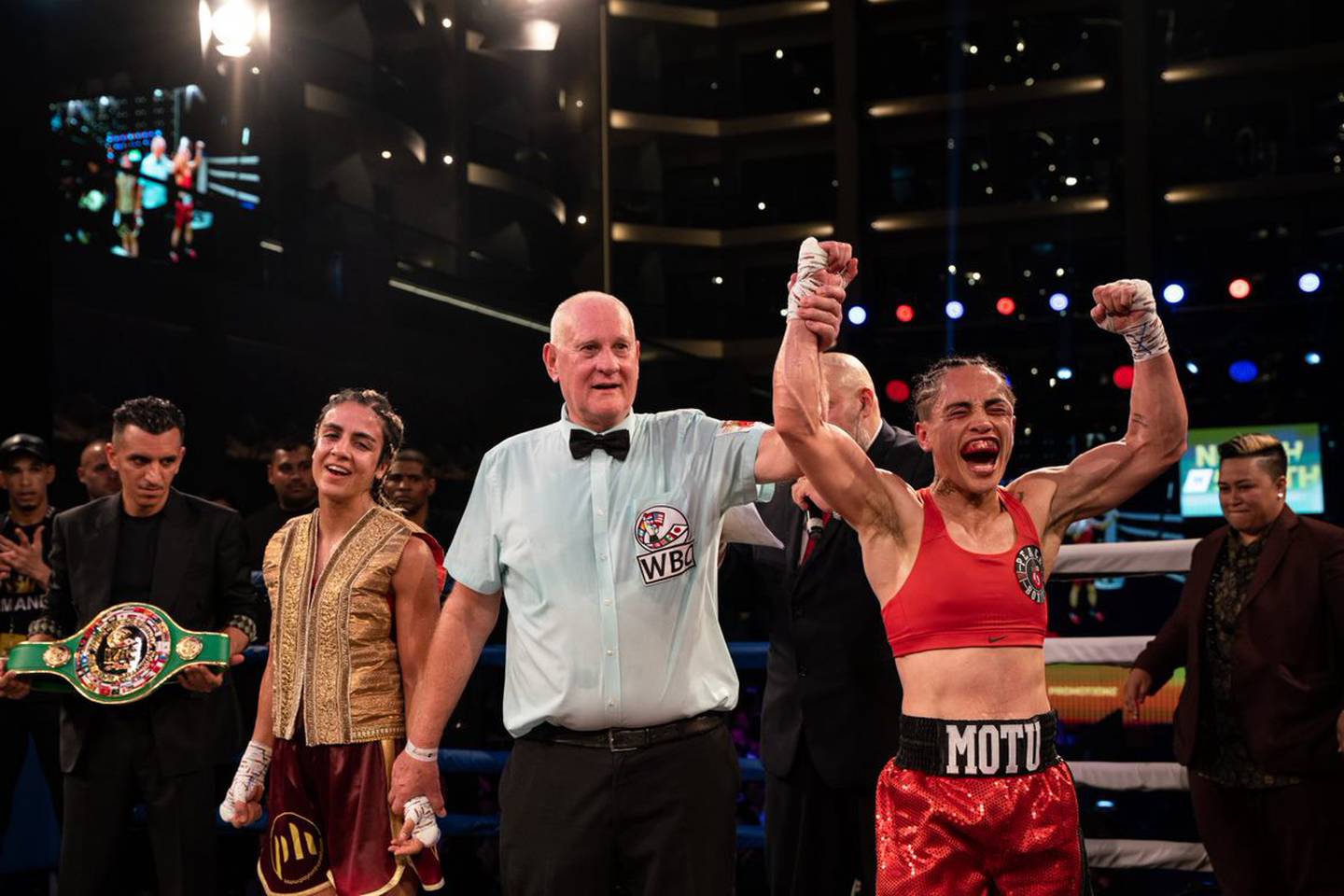 “I am glad that it’s over, but gosh, I just had to bite down because of the heat; it felt like a heatwave,” she said.

“She [Fathi] was definitely trying to give it, but I felt like I was stronger. So I had to not box and just get ruthless and fight.”

Peach had nothing but praise for his fighter, who was competing outside of Aotearoa for the first time in her career.

“It was tough. After the first round, Mea’s energy was down, the time difference, and everything was a bit harsh. It was hot, it was difficult, but I thought we won most of the rounds, and after four rounds, they [the judges] came back and had it even. So it started getting really difficult,” he said.

“We had a terrible head clash in the first round, it was a big swollen lump, and we got a terrible cut above her eyelid; nothing went our way. So for Mea to dip deep and bring it out was amazing; I’m very proud of her.”

Motu’s win should earn her a ranking with the WBC, and she is also currently ranked with the IBF. The IBF and the WBC are two of the most prominent sanctioning bodies in world boxing, which will see even more doors opening up for Motu in the coming months.

“This was a big learning curve, and now it’s just only up from here,” Motu said.

From Dubai, Motu and Peach head to the US to be filmed for the reality TV show Celebrity Making of a Champion, where she will be mentored by the former heavyweight world champion, Tim Witherspoon.

Each fighter will have a mentor throughout the series. For someone who enjoys studying the history of boxing as Motu does, the series offers her a unique chance to rub shoulders with some of the sport’s greats.

“We are going to meet a lot of old-school fighters, referees, coaches, and just [work towards] understanding the game that they had to put their fighters through, and what they went through, " Motu said.

Motu spoke to Te Hiku Radio about the reality series;

“I will be on this reality series and it will be based in Las Vegas. It will be like Contender. It will be getting filmed here in New Zealand and it’ll be about me getting to know more about where I am from and my background. We will learn more about our Māori culture and then they will fly me back to Las Vegas to fight. If I win then I win a million dollars,” detailed Motu. 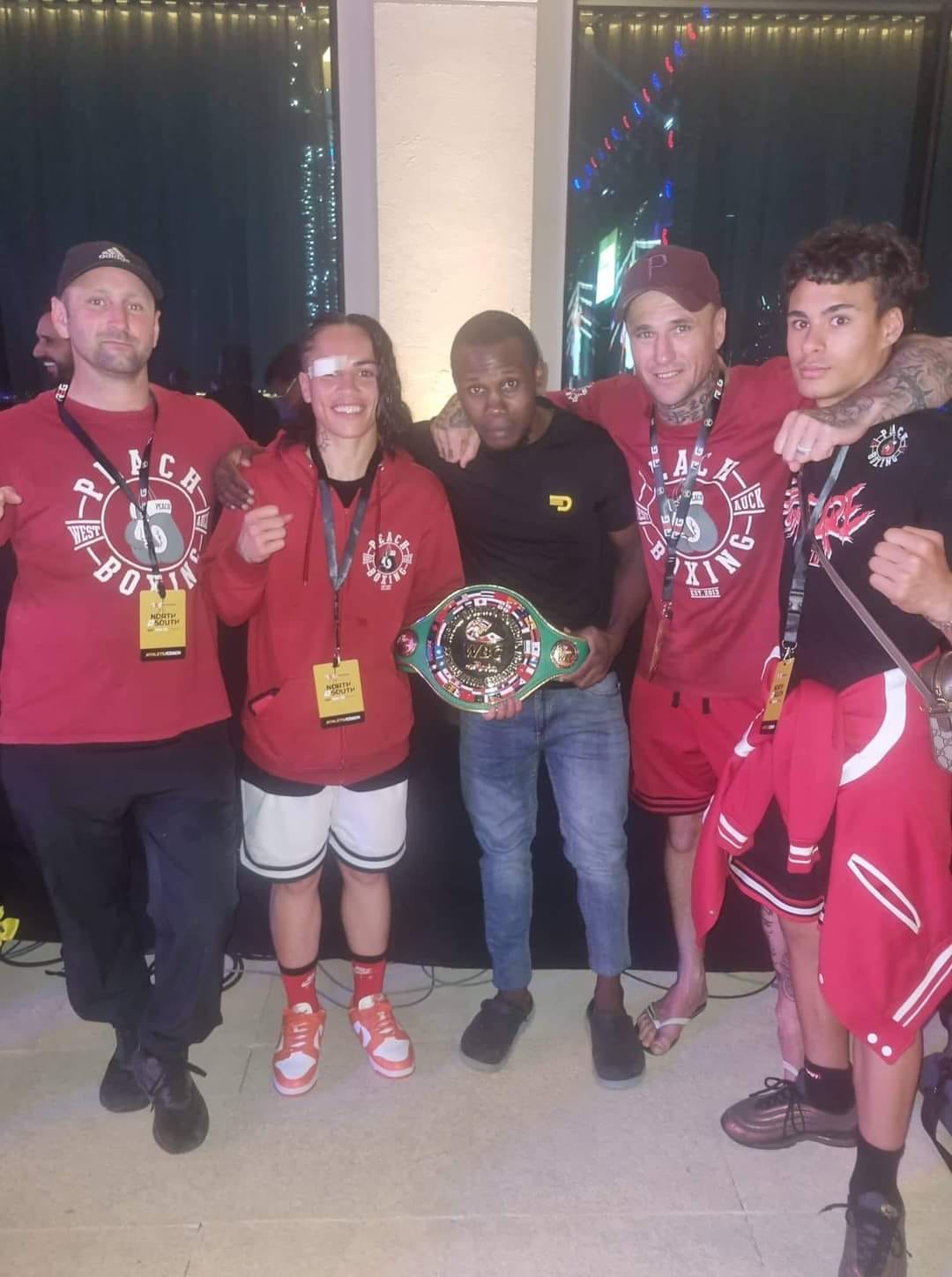 Kaitāia is celebrating several great feats which include the return of Krystal Murray after her win with the Black Ferns in the 2021 Rugby World Cup and gold and silver Commonwealth powerlifting medalists within the last week. Motu’s achievement coincides well with the unveiling of the new tomokanga for her iwi in Kaitāia and Pukepoto.

There is much to celebrate within our community, the recent triumph in sporting accolades and cultural acknowledgement definitely cements these moments in history.